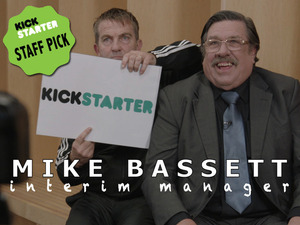 2. Bassett finds himself anointed interim manager to take the England team through the 2014 World Cup finals having been previously appointed assistant manager by Mannstein to act as an intermediary between the English players and Mannstein’s German back room staff.

3. You can follow Basset’s career here. Some highs and lows there.

3. The trailer is part of a kickstarter fund to get the film made. Stump up and you too can be in it. They are half way there already.

4. Ricky Tomlinson is a stage name. His real name is Eric.

5. Eric did two years inside for conspiracy as part of union agitators ‘The Shrewsbury Two’.

6. Broadsheet Prognosis: Get in my son.

(Delboy is trapped in his car. Dylan is Tom Dillon, Broadsheet writer and award winning photographer)