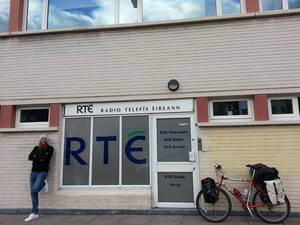 Derek Cullen at RTE this afternoon

After cycling 11,000km unsupported through Africa while living in a tent…

I’ve just returned to Ireland after cycling for one year from Africa for [children’s cancer charity Aoibheann’s Pink Tie. Basically I was given a Garda escort through Dunboyne, Co Meath yesterday to the castle where I met the children with cancer and their families for the first time.

there was a Q & A with all the little ones which was just lovely – their questions were things like “Were you afraid?” “How did it feel being chased by an elephant?” or “Where did you find water?”.

I also met Aoibheann’s parents for the first time after speaking with them from afar all year – Jimmy and Ann Marie, it was an honour to cycle africa for one year with the Spirit of Aoibheann on my shoulders. Cheers guys.

Fair play though in fairness

7 thoughts on “Return of A Ledge”