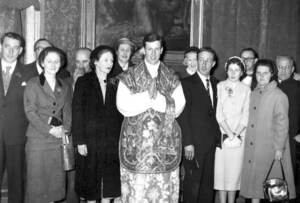 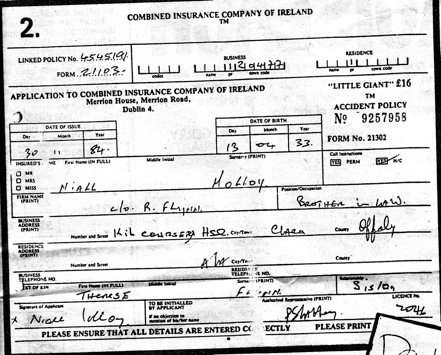 From top: Fr Niall Molloy in the Irish College in Rome with relatives and friends in the 1960s and a false insurance claim on Fr Molloy’s life

Justice Minister Frances Fitzgerald is considering a report that aims to explain some of the mystery surrounding the death of Fr Niall Molloy ending a three decade wait by his family.

Ahead of this we have prepared a brief timeline of events around the case since the killing in Roscommon in 1985.

At 3.15 a.m., James Duignan, parish priest of Clara, arrives at Kilbeggan Garda Station and informs Sergeant Kevin Ford that Fr Molloy has been killed at Kilcoursey House. Maureen Flynn’s mother Therese, a childhood friend of Fr Molloy, has already been sedated and taken to hospital.

Richard Flynn, Maureen Flynn’s father, makes a statement to the Gardai in which he states that he hit Fr Molloy several times with his fists in his bedroom following an unprovoked attack by the priest and Therese Flynn in the course of an argument over drink.

1986: Richard Flynn is tried in Offaly Circuit Court for manslaughter. The presiding judge, Frank Roe, writes to the Director of Public Prosecutions, Eamon Barnes disclosing prior knowledge of the Flynn family and Fr Molloy.

At the trial, Judge Roe directs that the jury acquit following an admission by Dr John Harbison, state pathologist, that heart failure could not be ruled out as a contributory cause of death, telling them “it’s a little bit unusual but not improper of me to say that no one intended any injury to be caused.”

A subsequent inquest finds that Fr Molloy died of acute brain hemorrhage consistent with an injury to the head. Speaking to RTE News after the inquest, Richard Flynn’s son David states:- “It’s very difficult, maybe, when one knows certain answers and isn’t in a position to comment. It makes it very difficult to live with.”

1987: Theft of the Niall Molloy file by criminal Martin Cahill.

1992: Niall Molloy file returned to the Gardai in a deal struck with Cahill and his criminal associate John Traynor, in return for charges being dropped against Traynor. Subsequently Sunday Independent crime reporter Veronica Guerin is made aware of certain contents of the Molloy file, including Judge Roe’s correspondence with the D.P.P. Guerin was working on the Molloy story at the time of her murder in 1996.

2003: Death of Judge Roe. His obituary in the Irish Times states:- “[h]e came from a staunch Fine Gael family and his political sympathies were always well known. He was described as ‘strong Fine Gael’ this week by those who knew him, and he was active in Fine Gael politics for most of his legal career.”

2010-2012: Irish Independent reporter Gemma O’Doherty carries out an investigation into Fr Molloy’s death. The results of this investigation, based on information supplied by Fr Molloy’s nephew Bill Maher (who has spearheaded the family’s campaign for justice for three decades) and  the statements of a number of individuals, including that of a Kilkenny surgeon, now deceased, details the presence of political figures in the house on the night of Fr Molloy’s death, and concludes that the blows causing death occurred downstairs, in the presence of a number of people, and that he took several hours to die.

As a result of Ms O’Doherty’s work, the Gardai Serious Crime Review Team (SCRT) is appointed by Garda Commissioner Fachtna Murphy to re-examine the case.

Following concerns regarding the conduct of the Gardai in the initial investigation, including the failure to investigate a fraudulent insurance claim on a life policy taken out in the name of Fr Molloy naming Therese Flynn as beneficiary, Roscommon Labour Senator John Kelly demands his party uphold its pre-election pledge to establish an independent inquiry.

Minister for Justice Alan Shatter appoints prosecution counsel Dominic McGinn SC to conduct a review of the contents of the Garda SCRT report and in light of that review to (i) prepare a report on any issues of public interest that may arise so as to facilitate the reviewer’s report being put into the public domain as well as (ii) to identify any matters of significant public interest or concern which would warrant examination by a further inquiry, which would have a reasonable prospect of establishing the truth.

2014: McGinn Report delivered to Minister for Justice Frances Fitzgerald. The Molloy family is not informed and finds out about this online.

Yesterday: The Report Is In

Pics via Bill Maher at Justice for Fr Niall Molloy

A Meeting With Justice