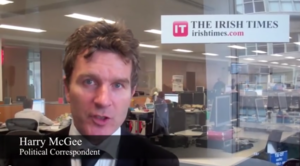 And say it anyway.

“It looks like the next Dáil will be settled by Independents. I don’t think the number will be quite the 52 that has been projected but I think they will almost have a seat in every constituency. And then people would have to think through the consequences of that. Like just what Shane Ross and others have been saying in the past week, they’ve been saying that they would dispense with the whip system which is a political popular thing to say.

But it means that, I mean, the reason for the whip system isn’t, they’re not just doing it for the health or the discipline of the party. They’re doing it because they have to ensure that when they’re making very tough decisions, when they’re doling out the tough medicine for everybody, that there has to be some discipline and they have to make sure that everybody is on board and if they were to throw the whip system open, as some Independents are doing, it would mean that you’d have a system where taxes would inevitably be cut and spending would be increased and you get the kind of most populist policies being projected and then, in relation to legislation, you’d have TDs subject to intense lobbying both from vested interests and also from their constituencies and you have situations that would conceivably lead to stagnation and paralysis.

There’s not really been any instance in Europe of a country in which and independent administration has been successful. The only place indeed it has worked is in very small instances. You’d have to go to Tahiti islands and other places to see that. So people would have to think through the consequences of what their vote will mean and if the figures that were projected this morning come to pass, I think it will lead to inherent instability and a general election being called in short order. We’ll have a 1981/1982 situation… when there were three elections held in the course of just a year and a half.”

Following the Ispos poll results in the Irish Times this morning, on Today with Seán O’Rourke, the newspaper’s political correspondent Harry McGee warns voters to “think through the consequences”.

“Seán, You’re Sounding Like A Member Of Fine Gael’s Frontbench”

85 thoughts on “Feel The Fear”