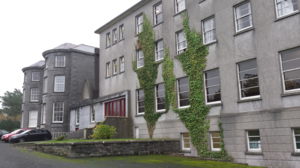 Mount Trenchard  outside Foynes, Co. Limerick, above, and Lycamobile

The Irish Refugee Council described the Mount Trenchard direct provision centre outside Foynes, Co. Limerick as “one of the worst in the system”.

It’s understood 50 men live in the centre where there are six to eight beds in some rooms.

If any readers would like to send care packages to the men in Mount Trenchard this Christmas – or indeed to any of the asylees in the direct provision centres in Limerick – they can send them to Limerick NGO Doras Luimní  and the group will distribute them to the asylum seekers.

Aideen Roche, of Doras Luimní, said the people in the direct provision system would really appreciate phone credit as this is, by far, the one thing asylees spend most of their weekly allowance on, with Lycamobile being the most popular service used.

People can purchase Lycamobile SIM cards (with €10 of preloaded credit) and/or phone credit from Centra and SuperValu stores nationwide.

The other most popular items would be toiletries, such as deodorant, shower gel, etc. Snacks for eating in the centre outside of the set meal times would also be warmly received.

Meanwhile, each asylum seeking child in Ireland receives €9.60 a week. There are approximately 1,500 children living in the direct provision system in Ireland.

In light of this, the Jesuit Refugee Service Ireland is hoping to deliver toys to children living in direct provision centres this Christmas. The group is appealing for people to send a new, unwrapped toy by December 17 and they will distribute them to the children.

The JRSI has two offices, one in Limerick and one in Dublin. The Limerick address is Della Strada, Dooradoyle, Limerick while the Dublin address is The Mews, 20 Upper Gardiner Street, Dublin 1.

What Are They Building In There?