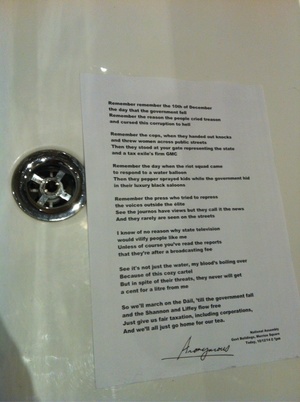 I know I’m no John Moynes but would you care to share my scribblings in advance of [today’s] march.

Remember the cops, when they handed out knocks
and threw women across public streets
Then they stood at your gate representing the state
and a tax exile’s firm GMC

See it’s not just the water, my blood’s boiling over
Because of this cozy cartel
But in spite of their threats, they never will get
a cent for a litre from me

So we’ll march on the Dáil, ’till the government fall
and the Shannon and Liffey flow free
Just give us fair taxation, including corporations,
And we’ll all just go home for our tea.