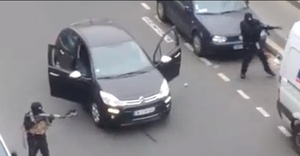 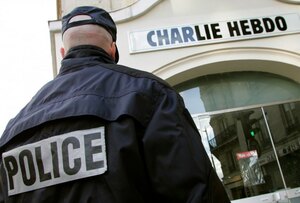 The scene (top) outside the offices of Charlie Hebdo in Paris, France this morning.

At least 12 people are dead after three hooded gunmen armed with Kalashnikovs attacked the headquarters of a French satirical magazine and opened fire on journalists and police guards.

The three men – described by a police union spokesman as “commandos” – are on the run after walking into the offices of Charlie Hebdo in Paris’s 11th arrondissement at about midday and fleeing in a getaway car driven by a fourth.

Charlie Hebdo is a satirical magazine known for publishing controversial cartoons of the Prophet Mohammed in 2012.

“Several men in black cagoules were heard to shout ‘the Prophet has been avenged'”, wrote Pierre de Cossette, a broadcast journalist with Europe1 News.

Previously: Anything Good In Charlie Hebdo? 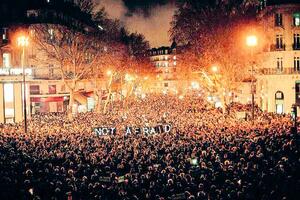 113 thoughts on “Meanwhile, In Paris”