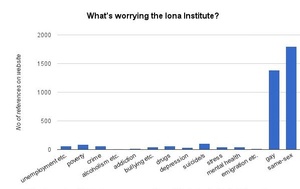 They think of little else.

Because I have a lot of free time on my hands and no life, I spent some time last night doing searches on the Iona Institute [ Multi-denomination think tank] website to see how frequently particular words appear on it.

Bear in mind they’re supposedly an organisation concerned with the rights of children and problems facing families and the institution of marriage in Ireland. So I chose words that I thought would be relevant.

I got the data from Google. You just type in each term followed by “site:www.ionainstitute.ie” – the latter part makes the search specific to the site itself.

So, for example, typing into Google “unemployment site:www.ionainstitute.ie” will return the number of references to the term “unemployment”. Ye probably know all this already. I’m just saying it so ye can check the figures for yourselves, if ye wish….

If the occurrence of particular words can be taken as an indication of what they’re concerned about, then their worries seem rather skewed towards one issue: gay people. Under the term “gay”, I didn’t even include words like lesbian, homosexual, homosexuality etc. That would have made the count even higher.

This Could Be The Last Time