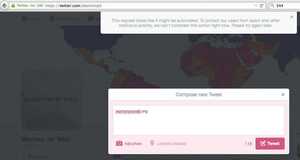 “Twitter has disabled the possibility to link to the Women on Web website or to tweet a link to the website. Women on Web was founded by Women on Waves in 2005, to respond to the urgent request for help for an abortion of women in countries where this healthcare service is not available.

Lead Us Not Into Temptation

What Could Go Wrong?