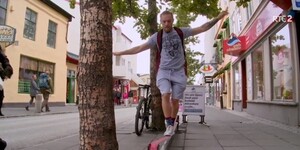 There is no escape

A trailer from episode one of Conor ‘The Ubiquitous’ McGregor’s new series, The Notorious, which starts on Monday at 10pm on RTÉ Two.

“In episode 1, we find McGregor recovering from a knee injury after his win against Max Holloway last August. As he battles through gruelling physio and training, he must get back to his peak for his first fight in 10 months against Brazilian Diego Brandao. On home soil, McGregor must prove his worth as a sold-out O2 Arena awaits his arrival. With exclusive access, we see his team training in Iceland, his girlfriend and family adjusting to fame and the rigorous preparation required for a bout in the UFC.”

Previously: No, No, No Notorious