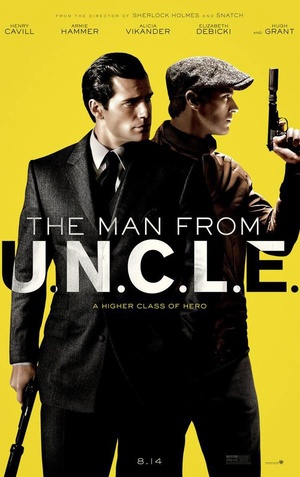 3. Ritchie’s recent good fortune is a massive turnaround from his mid-noughties slump, which included inflicting Revolver (2005) on the world and marrying Madonna.

4. If Cavill and so-hot-right-now (thank you Xposé) Jamie Dornan ever met it would unravel the very fabric of the space-time continuum.

5. Batman v Superman: Dawn of Justice (2016) is the Cavill trailer that everyone’s waiting for. Word is that it will surface around the release of Mad Max: Fury Road in May.

6. This is Hammer’s first role since Disney’s megaflop, The Lone Ranger in 2013. Incidentally, The Lone Ranger wasn’t a bad movie, but bad press from critics willing it to fail snowballed, and it had the reputation of being a failure long before it was released.

7. In case you’re wondering, U.N.C.L.E. is an acronym for “United Network Command for Law and Enforcement.”

Broadsheet Trailer Park: This Is The End (Red Band Trailer)

Broadsheet Trailer Park: Peaches Does Herself

12 thoughts on “Broadsheet Trailer Park: The Man From U.N.C.L.E”