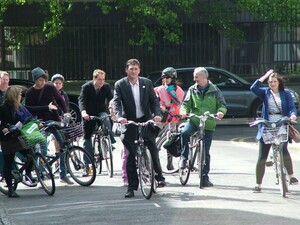 Green Party member David Gosling outlines why he has stuck with a party some perceive as “at best a bit kooky and at worst deluded”.

And why you should TOO.

I am a Green Party member since 2006. I like to think that my life to date has encompassed activities and experiences which allow me cast a critical eye on the world around me. I am 48, an ex-Army officer/Facilities Manager/small scale property developer/ex- e-commerce business owner/charity worker/full time MBA student and I am currently part of a small team readying a Built Environment – Carbon and Cost Reduction business for launch. I am married, with two small children, and I have lived and worked in London, Singapore, Western Sahara, Lebanon and a number of other countries.

I am not a natural Campaigner, nor Politician. I am interested in the efficient, effective and successful creation and running of organisations which see the world in a broad and holistic manner; in assisting societal, behavioral and personal change; en route to securing a positive future for our children and their descendants.

In advance of elections the only way for most people to judge political parties is to read election manifestos with a critical eye. This is where the spoken word is locked into written form; immutable for eternity; though not necessarily followed through when in Government. In 2007 I read all of the parties’ manifestos before the election and it was heavy going! The manifesto that made most sense was by the Greens.

The particular measure that sealed the deal for me was the proposal on Capital Gains Tax. I was in the property business at that time and had benefited from the low, 20%, rate prevailing. “Oh-oh” I thought, “this will be bad news for the likes of me”.

But it was nothing of the sort, the proposal was to increase CGT to 25%, in line with the lowest effective rate of taxation. Rationally, the Greens saw the inequality in those realising windfall profits paying less tax than those in low paying jobs. And many other proposals were rational, logical and progressive.

To a woman and a man Green representatives, and I don’t necessarily agree with all of them, are honest almost to the point, sometimes, of political naivety.

They reduced political donation limits, eschewed corporate donations and took necessary political action when it was right to do so; Trevor Sargent’s resignation, first as party leader and then as a Junior Minister displayed this. Accusing past and present Green representatives of being in it for themselves is, in a very loose comparison, like accusing Gandhi of being in it to become a celebrity.

But sure aren’t they all the same those politicians!

Well, no, they are not all the same: Haughey & Fitzgerald, Blair & Churchill, GW Bush & JFK, National Socialists (Nazis) & Indian Congress Party! But we are talking about Irish politicians here, about Irish political parties, about our specific political system. However, the answer remains: are Sinn Fein the same as Labour, is Enda Kenny the same as Eamon Ryan, is Willie O’Dea the same as Michael D Higgins? No.

Liverpool FC dominated in the 80s but fell from grace. Are they a waste of a team now? Did they make mistakes even during their reign? Are their current players useless? Similarly the Greens made mistakes, but in good faith.

Does the combination of trying to change elements of the system for the better, bad timing and ‘greenness’ while in their first government make them self-serving or cynical? See here for Green Party achievements in government.

The Greens are a serious political proposition; a proposition which encompasses moral, ethical and scientifically backed policies and the political will to push for change; a combination, if an honest comparison were to be undertaken, missing in virtually all other parties. Unfortunately, the reality is a perception, amongst a section of the public, that the Greens are at best a bit kooky and at worst deluded as to their importance in the political system.

This is an unfair categorisation because many rational blue, and white, collar voters see in the Greens echoes of their own concerns. Concerns about daily life, community life, national life and of course life globally.

Another, more difficult and immediate, concern to the Greens is the overhanging legacy of time in Government with Fianna Fail. The part played by the Greens in the inflated economy which led to the bursting of the property bubble, derailing the economic stability and progress of the country; the weakening, or at worst, destruction of our national sovereignty.

Let’s debunk the former concern and examine the latter. Rationally, and this is the key point, the Greens did not contribute to the raising of the country to its awful tipping point. How could they have? They entered government on 2006. By 2000 the Celtic Tiger; defined by rates of economic growth, not rates of house completions or BMW purchases, had stopped roaring and the property boom replaced it in the upward only drive to the top.

By late 2006 the residential property market had begun its decline. I know this because I put a house on the market in spring 2006 and rejected an offer assuming the autumn selling season would see it worth more. It sold for less than the spring offer!

The slide was on. So; the Greens in government with FF did not contribute ‘directly’ to the positive economic growth in the late 1990 ’s, but more crucially did not have any hand in the madness that was the property boom; in fact the Greens were one of the few political voices of restraint and caution during the boom.

Most rational Irish people know this; whether they expediently blame the Greens for some sort of “ah but they were in Government during the boom” or not. Far more crucial to our current reputation is the perception of our part in the bank guarantee scheme and NAMA.

Yes, the Greens were part of the Government which agreed to, created and implemented the measures; measures seen as necessary to stabilise the Banking Sector and thus the national economy and even, daily life on the island. Heavy stuff this! Yep, they were there, reading the analyses, at the table, in the room, at the helm when the bottom fell out of not only our economy, but out of our collective world.

Policies and actions roundly criticised by opposition parties. Parties who, rather like the child who ‘hated’ his classmate’s sweets, only to eat them when the other left them on the table. Fine Gael/Labour in effect plagarised the necessary policies and actions of the Greens and their government partners.

For me, a supporter of the decision to enter government with Fianna Fail and of the implementation of NAMA, the Greens are facing a particularly interesting issue. In the lead up to the 2016 General Election they find themselves in a somewhat bizarre place at the center of the current political landscape. Not an ideological position, but one of perception.

With FF, FG Labour and Sinn Fein occupying the place of the known quantity; of larger numbers of Dail seats, of rigid structures and fixed positions as to how to govern the country. These parties are not to be trusted to do the right thing. Their histories are of doing the expedient & electorally appealing; give-away budgets, while ignoring the need for social funding etc.

On the left we find the ‘Garage/Start Up’ parties; a scrappy insurgency of loosely affiliated socialists, water protestors, austerity protestors and other independents and interest groups. Bizarrely these; ‘socialist’ leaning parties/groups do not believe in high levels of taxation, or in government; cornerstones of Socialism globally. The Greens are neither bound by history, precedent or by radical yet incoherent positions, perspectives or policies.

36 thoughts on “Another Chance”