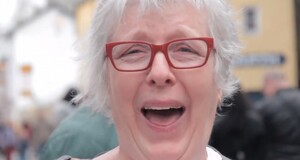 You never forget your first time.

“We went out onto the streets of Kilkenny to ask people about their first kiss, how they knew they were straight or not and do they think that gay people should be allowed get married? It includes some of the bravest young people and open minded older people I have ever met and gave me huge hope for the vote on marriage equality on the May 22nd. Please make sure you are registered to vote.”

34 thoughts on “First Love In A Cold Climate”