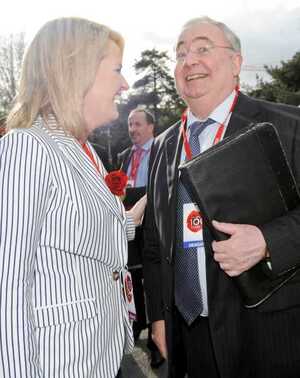 “On convicting a person for an offence [sending ‘grossly offensive’ messages], the court may, in addition to any other penalty imposed for the offence, order any apparatus, equipment or other thing used in the course of committing the offence to be forfeited to the State.”

That’s your tablet that is.

… imagine you send a tweet sugggesting Pat Rabbitte was a bit of a hypocrite condemning political organisations with links to paramilitaries who murdered people, given his own political history. Granted that might be hard to fit into 140 characters, but imagine it was possible for the sake of an example.

And say Pat Rabbitte was a litigious sort of character who didn’t want to be publicly associated with any of the murders, bank robberies or lots of stuff the Official IRA was involved in when he was member of the Workers Party, the political wing of the OIRA.

I guess you’d be into a couple of tweets now, something that might be construed by Rabbitte and his expensive legal team and barristers as “persistent and without legitimate cause”.

It probably might not matter that you feel it important to public discourse that many younger people ought know that that a former minister – responsible for promoting austerity and a gagging law – was once a member of a politico-paramilitary organisation that murdered people.

You might even infer that the Stalinist tendencies embodied in WP/OIRA back in the day could be found in a bill that seeks to quash public online political dissent today by actually making it illegal to be a political nuisance.

So you are taken to court and found guilty. Say your day job was a graphic designer, or architect or any other job that requires a laptop and/or mobile phone and access to the net. Your ability to earn a wage (or get donations) relies on these things. Rabbitte’s bill allows for a judge to remove that wage earning ability by seizing the tools of your trade….

Previously: What Are They Playing At

A Savage Hunt Down The Rabbitte Hole