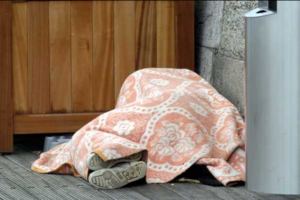 A homeless person sleeping on the boardwalk in Dublin city

“The number of people sleeping rough in Dublin has fallen by almost 40 per cent since the winter. The results of the annual “spring count” of rough sleepers published by the Dublin Region Homeless Executive shows 105 adults were found sleeping on the streets on the night of April 14th. This compares to 168 in the winter count conducted on November 21st. However, the number of homeless adults in emergency accommodation increased by more than 300, up from 1,526 in November to 1,872 this month. This figure does not include the almost 1,000 children in emergency hotel-type accommodation in Dublin.”

On The School Run