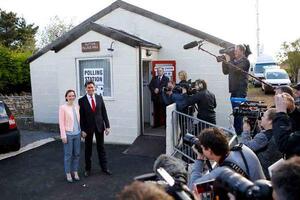 On Wednesday, ICM released provisional numbers which showed the two main parties deadlocked on 35% each. But the telephone fieldwork continued into evening, and the final figures – based on the full sample of 2,000 interviews – find Labour holding steady on 35%, while the Conservatives slip to 34%.

Now, I’m not one of those guys who think that all Conservatives are evil. This is a solipsism from which I was saved by the reality that nearly everyone else in our family was, in essence, a) a decent, loving person and b) a Tory. A father, a stepfather, four grandparents and a beloved great-aunt – all dead, all Conservative voters. But it’s worth making a distinction between the voter and the thing that they’re voting for. Life is long but too short to hate people. Still, it’s entirely legitimate to hate a set of ideas.

And a tone of voice. Every day, I walk past the newspaper stand of the local shop and see the headlines blurting from the Tele­graph, the Daily Mail and the rest of them: how business “leaders” are scared of Lab­our, how Ed Miliband is a threat to literally everything that was ever dear and good, how Nicola Sturgeon is personally about to tie him to a chair and beat him around the head with a concrete (if it’s the Mail, inevitably) haggis until he calls the Kremlin and invites Putin to come over and strangle the Queen, and so on.

And I think, wow, these guys aren’t kidding around. The right-wing establishment – the Tories, their self-interested newspapers, their self-deceiving friends in the City, their self-serving business supporters signing their bullshit letters – are throwing everything at this.

Not just the kitchen sink but the plumbing, the sewers and the attendant rats. They can’t bear it. They can’t bear to be challenged. In the fathomless depths of its arrogance, they just can’t cope with the thought that anyone else could be allowed to run the show.

I wouldn’t put Ed Miliband on a T-shirt, but I will vote for him (Rober Webb, The New Statesman)