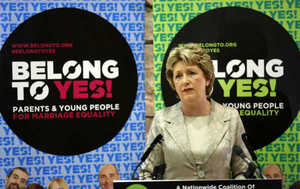 “My husband and I have been happily married for almost forty years. We are Catholics and have campaigned for marriage equality for gay citizens, as a family, since long before we had children.

Not in the least. But it will greatly affect my life and the lives of all parents of gay children. It will give us peace of mind about our children’s future and pride in our country’s commitment to true equality. It will right a glaring wrong.”

We have all ignored a very important reality that on both sides of the referendum argument there is considerable agreement about the need to regulate surrogacy, a need that will exist whether the referendum is passed or defeated.

No-one in Ireland, whether heterosexual or homosexual, has a legal or constitutional right to procreation using surrogacy. This referendum if passed will certainly not create any such right. It is a nonsense to think it could.”

Some Churches take a very different view of definitions of both marriage and the family as is their right. They are perfectly entitled to hold to their own definitions and have them respected by our laws of religious freedom but they are not entitled to insist that their religious definitions should prevail in our secular civil law which makes non-religious provision for all citizens.

This referendum is about extending to gay citizens the secular, non-religious right to marry in a registry office, a right that heterosexual citizens already enjoy under our Constitutional law.”

Mary McAleese this morning speaking at an event hosted by BeLonG To, Ireland’s national organisation for Lesbian, Gay, Bisexual and Transgender young people.

32 thoughts on “A Canon Lawyer Speaks”