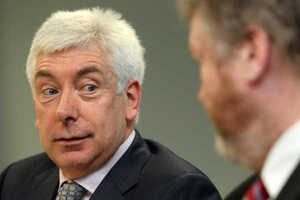 “I don’t understand why Minister for Communications Alex White is so averse to legislation to clean up past media ownership deals that are strangling freedom of speech (“McDowell ‘chancing his arm’, says Minister”). In the past Mr White has vigorously defended openness. But he is guardian of an industry where Denis O’Brien has been allowed a controlling interest in media from Antrim to Kerry, in print and on the airwaves.”

“Diversity is obviously necessary in media ownership. But both the Competition Authority and the Broadcasting Authority of Ireland have been remiss in protecting the public interest on this issue. Why? It seems to me that corporate power speaks loudest in the ears of each of these bodies.”

“Sadly I fear Mr White gets to the heart of the issue when he also cites “labyrinthine commercial issues”. It’s my guess that, at the heart of that labyrinth is a Denis O’Brien, still awaiting his Theseus.
RONAN BRADY,
Dublin 7.”