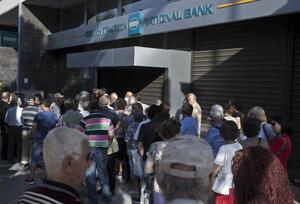 What’s worse than a run on the banks?

Letting the Greek people decide their own fate.

Tomorrow [Tuesday June 30], the Greek government is supposed to pay back an IMF loan of €1.5 billion. But Greece doesn’t have enough money for that. So it needs to receive new loans from the European Union to pay it back along with some other loans that will have to be paid in the near future.

However, the EU says it will only lend Greece the new money if Greece agrees to a series of austerity measures. But Greece is not ready to do that to the extent that the EU wants to.

Of course, the whole drama is a scam because austerity measures do not work to revive an economy in a downturn – they actually make it worse. So why are the EU and IMF insisting on those measures, if everybody knows they don’t work? Because they want to restructure the Greek economy in a way that benefits corporate power.

This involves a range of things like privatization of state assets that can be taken over by private interests, cutting salaries and pensions to make labour cheaper for employers, enacting low corporate tax rates, etc.

Therefore, it goes without saying that the troika is very much opposed to ordinary people having any say in this, because it knows full well that such policies would not be accepted. The troika thus has to oppose democratic forces.

This became clear when, tired of negotiating with the EU governments, Greece pulled off a nice trick: a popular referendum. Greek people will vote, next Sunday July 5, on whether they want to accept or reject the latest offer from the troika.

The fact that the very idea of a referendum was greeted as a bombshell in the media shows how unaccustomed we have become to resort to democratic decision making in Europe. In fact, there is nothing wrong in letting people decide on matters that will affect their lives. This should be the norm, not a surprise.

But elites everywhere are horrified, in particular, the Irish government. Enda Kenny reiterated once again that Syriza should get serious and that Ireland wouldn’t support debt write-offs, even though it is obviously what is needed.

Joan Burton said that Syriza is just interested in lecturing the rest of Europe about economics than being serious. Michael Noonan said emergency funding to Greek banks could be cut off unless a deal is reached. And you can safely bet that many other politicians thought the same.

The reason is a classic one in power systems in which a minority of elites seek to control the majority of the population: the threat of a good example. This means that if Syriza is seen to be winning and provide a clear and working alternative to austerity, this is likely to embolden similar forces elsewhere in Europe and could ultimately spell disaster for conservative forces like the Irish government.

Those who think that’s a conspiracy theory don’t understand how power works. For example, Stephen Collins, the conservative Irish Times commentator, does understand, and says exactly the same thing. He wrote a piece that pointed to the threat of “contagion”, i.e., the threat of a spreading Syriza example in Europe:

“If Syriza gets a substantial debt write-off and further financial aid with no serious commitments to political and economic reform, the response of the main Irish parties to the crisis here will be utterly discredited. The political implications of that are obvious. Sinn Féin in Ireland, Podemos in Spain and any number of populist left and right wing parties would be on the march in Europe. Political contagion rather than economic contagion would become a real threat to the euro and the future of the EU itself.”

Since our leaders are opposing the Greek people and Syriza, the only hope to change anything is an international campaign of solidarity and action at the grassroots level.

The Greek Solidarity Committee has just been formed in Ireland and needs members. This week it will organize a series of events and protests. Its facebook page will provide all details. Last week some of its member conducted a sit-in at the offices of the European Union in Dublin in which I participated (only to report for Broadsheet, of course).

Finally, the media has become filled with scare and horror stories of a potential Greek exit from the eurozone. Of course, the potentially destabilising consequences of Grexit are real. However, there are two main reasons why such fears might be exaggerated.

First, in my opinion, it would be very unlikely to see Greece exit the Eurozone because this could well mean closer relations with Russia or even China, for example to obtain needed loans. Greece might leave NATO. Greece could participate in Russian pipeline projects, etc. I find it hard to believe that the United States (and Germany and Europe) will tolerate that.

In fact, there have been press reports that yesterday President Obama spoke to Angela Merkel and that the two agreed that it was “critically important” to find ways to keep Greece in the eurozone.

The White House has issued a statement: “The leaders affirmed that their respective economic teams are carefully monitoring the situation and will remain in close touch. The two leaders agreed that it was critically important to make every effort to return to a path that will allow Greece to resume reforms and growth within the euro zone”.

Moreover, the US treasury secretary, Jack Lew, urged the IMF and European finance ministers to find a “sustainable solution” to Greek recovery in the eurozone, including debt relief is necessary. Lew said it was “important for all parties to continue to work to reach a solution, including a discussion of potential debt relief for Greece, in the run up to the 5 July referendum” planned by Syriza on Sunday.

Second, let’s assume I’m wrong and that Greece does exit the eurozone. Well, that most likely won’t be as catastrophic as we’ve been led to believe. For the first few months, sure, it will be tough and chaotic. But after that, growth could finally kick in and things should get at least better than they are at the moment.

Argentina, which did default and de-pegged its currency from the US dollar in 2001-2002, saw years of strong growth in the years that followed. If Greece even sees half of that growth, it would be amazing compared to the pain austerity has inflicted onto it since the troika got involved.

Such a successful default could actually provide an example to other European countries that exiting the eurozone is not the end of the world, but may actually be the beginning of a better life.

@JulienMercille is lecturer at UCD and the author of The Political Economy and Media Coverage of the European Economic Crisis: The Case of Ireland (2015, Routledge). His new book, Europe’s Treasure Ireland (Palgrave), will be out next month.

87 thoughts on “The Real Fear Is Political Contagion”