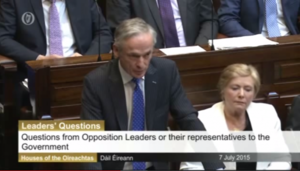 “I don’t have staff permanently in NAMA” says C&AG, contradicting Enda Kenny and MIn Noonan who used that as reason not to have Inquiry.

During Leader’s Questions on Tuesday, led by Richard Bruton, top, Mr Bruton insisted several times – in an exchange with Fianna Fáil leader Mícheál Martin – that there is a member of the Comptroller and Auditor General office ’embedded’ in NAMA.

Micheál Martin: “I am sure the Minister, Deputy Bruton, will agree at this stage there has been enormous concern about the sale of NAMA’s Northern Ireland loan book to Cerberus Capital Management. This was raised in the Dáil last week by Deputy Mick Wallace, who raised serious concerns and made serious allegations. We know BBC Northern Ireland has carried out an extensive investigation in a programme yet to be aired, but some of its people have already spoken about it. Many statements have been publicly made by key stakeholders involved, and various leading politicians have denied any involvement whatsoever. I am minded of the remarks made by the Minister, Deputy Michael Noonan, to the Joint Oireachtas Committee on Finance, Public Expenditure and Reform in April 2014. He asked the agency to conduct a review with a view to accelerating the sale of its loan book and bundling properties together. He stated: “I have asked [NAMA] if they have any suggestions on how we could work that and would it be possible to use it as a brake on the market.” By this, he was asking what would be the consequences at the end of 2015 of taking the residual NAMA book and doing what IBRC did to its residual book in selling it off in a six-month period. One might now argue that one of the consequences was the kind of deal done with Project Eagle, where the entire Northern Ireland property portfolio of NAMA was put into one bundle and sold at a loss of around €200 million to NAMA and a discount of approximately 72%. We now know that, essentially, £7 million ended up in an Isle of Man bank account. That is not contested. We know the money was in an account controlled by a former managing partner of Belfast law firm Tughans, which acted indirectly for Cerberus, the US investment firm that bought the loan book. We know Pimco, another large US firm, withdrew from a tender process for the same loan book, citing concerns about an unsolicited approach from a number of individuals.”

Martin: “It notified NAMA about the unsolicited attention and, as part of its due diligence process, pulled out because of concerns that it had. NAMA has confirmed that Pimco’s compliance staff discovered that its proposed fee arrangement with US law firm Brown Rudnick also included the payment of fees to Tughans and a former external member of NAMA’s Northern Ireland advisory committee. This is in the public domain and I am not naming any names. Tughans has now stated that a former partner diverted the professional fees into an account without the knowledge of other partners. Suffice it to say that this is very serious and profound stuff that goes to the very heart of whether a proper deal was done on behalf of the taxpayer. I acknowledge that we have had many different commissions of investigation established but, given the gravity of what has been alleged and what we already know publicly or NAMA has confirmed, a commission of investigation is urgently required to investigate this entire episode involving the sale of the Northern Ireland loan book to the company concerned. Has the Government made a decision to set up such a commission of investigation?”

Richard Bruton: “I thank the Deputy for his question. First, it is important to say that NAMA has a very clear public mandate to deliver best value and in that role it is very actively overseen by the Oireachtas. There is an embedded member of the Comptroller and Auditor General’s office working with NAMA, it conducts regular audits and representatives come to the Committee of Public Accounts on a quarterly basis with information. I understand NAMA representatives will be before the Committee of Public Accounts this Thursday, and there will be an opportunity for members of that important committee of the House to question those representatives on the way NAMA manages its affairs.”

“The issues raised and which are a cause of public concern regarding the destination of a fee are an entirely different matter. It is important to understand the way in which NAMA dealt with this. When it heard there was interest in the loan book, NAMA insisted there would be a competitive process and one of the companies involved, as the Deputy knows, was Pimco. It indicated that its compliance staff had uncovered a proposed fee arrangement and when this came to the attention of NAMA, it decided that if Pimco did not withdraw from the sale, NAMA could not permit it to remain in the sales process. On foot of that, Pimco withdrew from the sale. NAMA also sought assurances, I understand, in respect of the successful bidder in this project that there was no such arrangement in place. It received such assurances.”

“NAMA has discharged its business in a very thorough way. The issues raised by the Deputy in respect of the decisions made by the NAMA board on whether to sell loans individually or in a bundle are a legitimate matter for questioning at the Committee of Public Accounts. The representative of the Comptroller and Auditor General would have been across that decision at all stages and would have been involved with the auditing of the decision as it was made. This information on how the business was conducted is available to the Comptroller and Auditor General and it would be available to the Committee of Public Accounts. NAMA’s representatives will be before the committee on Thursday.”

Martin: “That is not a satisfactory answer in any shape or form. This is not about a routine appearance before the Committee of Public Accounts and it is not the subject of a routine audit. The timeline is very important. The fee arrangement mentioned by the Minister necessitated the withdrawal of Pimco was brought to the attention of NAMA by Pimco, by the way. No auditor or anybody else discovered that. Representatives of Pimco went to NAMA and indicated that its compliance personnel were very concerned about the unsolicited approaches, the nature of those approaches and the fee arrangements. Within a month, NAMA sold the package to another major investment company, Cerberus, apparently with a similar fee arrangement process in place and with the diversion of up to £7 million into an Isle of Man bank account.”

“It is glaringly obvious that this demands a very serious, independent and objective inquiry, with compellability, into the specifics of this issue. Very serious allegations have been made about what transpired and there are many unanswered questions. This is entirely unsatisfactory. This concerns the largest property sale ever on the island of Ireland, with 850 properties being bundled together and many intermediaries involved. A person was allegedly operating in a discrete office within the Tughans building and people who served on the Northern Ireland advisory committee of NAMA were involved with this issue. That is very serious and I do not buy the line that NAMA just accepted assurances, with that being the end of the matter. It is not the end of the matter. Just as with previous occasions, the Government has been slow to come to the mark on issues like this. I put it to the Minister that the Government must review its response to the issue and establish a commission of investigation to get to the truth.”

Bruton: “It is important to point out to the Deputy that the fee arrangement to which he refers did not involve NAMA in any way.”

Martin: “I did not say it did. Nobody is saying that.”

Bruton: “These fee arrangements were on the side of the buyer and not the seller of the loans. NAMA was not involved in any way and no payment was made by NAMA in any respect of these fees. That was not the case.”

Martin: “Do not look to answer questions that were not asked.”

Bruton: “The issue of how NAMA conducted its business is very clear. That has been overseen and supervised by the Committee of Public Accounts and the Comptroller and Auditor General has somebody embedded in NAMA. NAMA’s board is appointed by the Oireachtas to get best value and to have this level of Oireachtas oversight. We have a unique level of Oireachtas oversight with respect to this body and the opportunities are there for Members to raise issues at the Committee of Public Accounts, where they have the support of the Comptroller and Auditor General, an expert in forensic accounting advice who is the auditor to NAMA and who will have gone through these issues. Thursday’s meeting offers an opportunity to deal with the NAMA involvement. There are clearly other issues regarding fees paid on the other side of the trade and they are of public concern. I understand the Northern Ireland Assembly is investigating those, as is the Law Society, with respect to the solicitor involved. There are investigations of those matters under way.”

Anything Good In The Irish Times?

7 thoughts on “Who’s In Comptrol?”