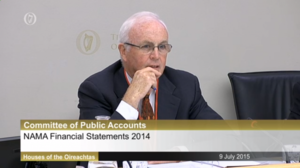 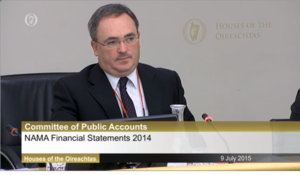 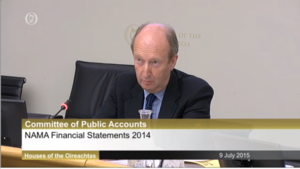 Nama executives went before the Public Accounts Committee this morning in light of the Northern Ireland portfolio/Project Eagle sale to Cerberus.

You’ll recall how, prior to Cerberus’ purchase, global asset management firm Pimco has claimed it was approached on an unsolicited basis by third parties with a proposal relating to the potential purchase of the Northern Ireland portfolio from Nama.

During the proceedings, Nama told the committee members that Pimco told it about a £15m fee arrangement with £5m earmarked for Frank Cushnahan, a former member of Nama’s Northern Ireland advisory committee.

Frank Daly: “I am very firm in my conviction that Mr [Frank] Cushnahan, or Mr [Brian] Rowntree indeed, did not glean any confidential information, or any useful insider information from being a member of that committee…”

Shane Ross: “What did they get €5million for?”

Daly: “I’m not going to speculate on that. But you could ask I mean, what were they paying him €5million for, you’d have to ask Pimco. You would have to ask elsewhere about that.”

Ross: “Kind of mind boggling though isn’t it that they’d go ask a guy to act for them and pay him an acquisition fee of €5million, if it’s just an ordinary Joe Soap off the street who didn’t know anything about the portfolio. He had an office as well?”

Daly: “I don’t disagree with your theory but all I can say to you is that from his work with Nama on the Northern Ireland advisory committee, he did not gain any inside knowledge of the portfolio. But remember, right, we’re talking about Northern Ireland and we’re talking about a relatively small business community where there is an awful lot of information out there about debtors, developers, properties, who’s in Nama, who’s not in Nama. It didn’t come from Nama. But it is there.”

Ross: “He had an office in Tughans, didn’t he, Mr Cushnahan?”

Daly: “Well he had, as I understand it, he had the use of an office in Tughans.”

Ross: “Did that worry you?”

Daly: “No it didn’t. If we knew then what we know now, a lot of things would worry us but at that time it didn’t worry us, no.”

Ross: “But you knew he had an office in Tughans at the time the bidding was going on?”

Daly: “At the time the bidding was going on?”

Daly: “Yes, he had the use of an office, that’s what Tughans have said.”

Ross: “Did that not set alarm bells ringing?”

Daly: “There was nothing at that stage, deputy, about any fee payment or any involvement, alleged involvement by Frank Cushnahan in this process. He was gone, he was gone from the Northern Ireland Advisory Committee in November 2013. We first heard, first heard, of any suggestion about his involvement with Pimco in March 2014. He was about 3, 4, 5 months gone.”

Daly: “Oh yes, that’s why we threw Pimco out, or sorry, got Pimco to withdraw.”

Ross: “But, and I’m not saying that you acted dishonourably, I’m just saying that that was just another factor that should have made you say this whole thing is flawed, This whole process is flawed. There is something wrong at every turn and there’s something suspicious going on and at that stage I would have thought that you might have been worried about the price you were getting at the end because there was so much going on in the undergrowth and in the background that you didn’t know about.
Let me just ask this question: there was millions sloshing around, there was 15million, one guy getting 5 million; there were all sorts of potential conflicts of interest happening here; there were political sensitivities and you ploughed ahead, ploughed ahead and said, ‘OK, we’ll take the Cerebrus bid’.”

Daly: “We didn’t plough ahead, we went ahead. After consideration, saying, ‘are we still getting  the best price that’s obtainable for this portfolio? Is there still competitive tension? There were still two bidders in there – seven of them had dropped out.
There wasn’t huge interest, by the way, in this portfolio, I must say, you know, and in the nine who came into the process, I think almost any company that would have had the scale to deal with this and the financial backing to actually deliver on it was invited in. Most of them backed out. This was not something that a whole lot of people were interested in.”

Brendan McDonagh: “And also to add to that, deputy, we were very clear at the start, we said to people, to Lazards don’t even think of bidding, or don’t even think of wasting your money bidding on this portfolio. We have a minimum reserve price of 1.3billion [Sterling] because we know the costs of due diligence that firms are going to send on it and we don’t want people wasting their money on a portfolio that they’re not going to pay up for so, at the start of the process in January, 1.3billion, at the need of the process, in April, we achieved 1.3billion sterling. So there was no question that we didn’t get the price that we valued the portfolio at.”

#Nama says it wouldn’t implement Peter Robinson’s proposal made 3 months before its NI sale in its wildest dreams. pic.twitter.com/JMJh30MA7G

PAC chairman sees it as feasible that Pimco was just a stalking horse. This is utterly explosive stuff in Dublin this morning.

One third of Project Eagle properties were located in Republic. Commercial prices increased by 32% in Republic in 2014, Residential up 16%. — NAMAwinelake (@namawinelake) July 9, 2015

NAMA has refused to appear before @NIA_FinCom following invitation yesterday. NAMA accountable to Irish parliament only.

Follow a live blog by Irish News on the proceedings here