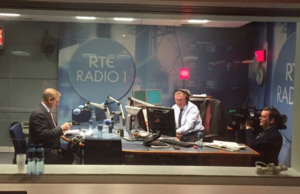 Taoiseach Enda Kenny was on Today With Sean O’Rourke this morning.

At one point in the interview, they discussed Greece and Mr Kenny told how he gave advice to Greek Prime Minister Alexis Tsipras and how he told the Eurozone leaders to ‘hold on a second here now’.

Sean O’Rourke: “Right now, you and colleagues, around Europe, the European Union and the Eurozone are grappling with the Greece situation. I don’t know if you’ve time to read the letters page in the Irish Times but there was one yesterday, from a man in Limerick, a man called Michael Mahony and he talked about, and you’re somebody who admires Michael Collins and he said, you know, ‘The parallels are striking… The Anglo-Irish Treaty was signed under threat of “immediate and terrible war”, just as Tsipras has been threatened with economic annihilation of Greece if he did not accept the terms of the bailout agreement’. You effectively, along with colleagues in Europe, you threw the Greek Prime Minister under the proverbial bus didn’t you last week.”

Enda Kenny: “Certainly not. The position, in so far as Ireland was concerned, was that we were being used as a reference point by other countries as to an expression of common sense: what did you want here? Greece is about 2% of the European economy. Clearly, the Prime Minister himself had said on many occasions at the European Council meetings that I attended at, that Greece did not want a default, that Greece didn’t want to leave the Eurozone, that Greece would pay its way, that what Greece wanted was an infrastructure investment programme, that he was prepared to deal with corruption, that he was prepared to put in place a functioning taxation collection system and that he was prepared to go down to the OECD and take best advice from them and from every other country.

But I would say this Sean, you see, to be straight about this now, I have attended I suppose maybe 25 or 30 European Council meetings and we’ve had Prime Ministers from Greece before, who came before the European Council and said, ‘I tell ya we’ve got a problem, we’re nearly out of it, almost around the corner, another €5billion and we’ll be there and help us out. Prime Minister Samaras had a primary surplus brought in, he was approaching a 1% growth pattern and Greece was actually able to get back into the markets. All this…”

O’Rourke: “Yes but the people voted him out in the election last year and then it came to this new Syrizia government and they said, and Varoufakis was talking to the New Statesman a couple of days ago  said that their “most energetic enemies” in trying to get a better deal for Greece, one that people could live with, were countries like Ireland, Spain and Portugal. And it’s not just him saying things like that. And there’s a quote in from an Irish businessman, Patrick Coveney of Greencore. He said, ‘If you have kept a country together and inflicted shared and collective pain from some medium or long-term benefit, and someone else comes up with the political equivalent of a get-rich-quick scheme, it undermines the entire narrative.‘ Said Coveney, now whose brother happens to serve in your Cabinet – it just did not suit your political purposes to see the Greeks get some relief that they badly needed.”

Kenny: No I disagree. You see in the run-up to the election in Greece, which was triggered after the presidential election, the rise of populism brought about all of this instability, there was a pattern of growth and a pattern of movement in  the right direction but Syrizia came along and said, ‘Ok, you don’t need to pay for this, we want to reemploy all the people who’ve lost their jobs and everything. And that’s, that’s their right as a political party. The people made a democratic choice. And now that’s put it back further than ever before and yet the Prime Minister himself said, ‘look, I recognise the scale of the challenge that  we face here now’. I have never met the former [Greek] finance minister Yanis Varouvakis, Michael Noonan met him a few time and he said, ‘well, a lot of his comments are, you know, general rather than being specific – where you need to be if you’re in that business of being a minister for finance.’ But I would say this. From our point of view, before last week’s meeting, the all-night meeting, I actually spoke to Prime Minister Tsipras myself, before the meeting started and I said to him, ‘Alexis, let me give you a piece of advice here, if I may, there are people around the table who don’t trust you. You have got to show them that you’re serious about what you say here because you won’t build trust the way it’s being happening. You’ve got to have a step-by-step demonstration and proof of your conviction and you’ve got to go back to your parliament.‘ And I just say on your show here while the pressure was on to introduce X amount of legislation by a particular date, I did say to the Eurozone leaders, ‘Hold on a second here now, you can’t drive that extent of legislation through just like that and gave, for example, the  marriage equality referendum here which the people voted in but which the Government haven’t been able to put through the House yet because of an objection to the Supreme Court which must hear it. So I said like, in any case, there might well be objections, I’m not sure what the situation in Greek is about court objections or injunctions to prevent legislation but he himself, he himself, Alexis Tsipras was very clear and this went on all night between the involvement of the IMF and the monies that were being talked about. He said, ‘I’ll have these four pieces of legislation done by Wednesday’.”

Kenny: “I explained all that.”

Kenny: “We didn’t increase income tax and what I was talking about was what the Greeks were talking about, they said their hospitality sector was absolutely critical to them and that the island, of which there are thousands have a very different system then operates on the mainland and and they were very concerned about that and I made the point that VAT in this country for the hospitality sector – you could you know  have tinkered about with it, reduce it by a half per cent. You could have put it down by from 13.5 down to 9, stabilises and created 35,000 jobs. I just made the point that our minister here, Minister Noonan and Minister Howlin, actually built a relationship with the Troika and said, ‘we don’t like that’. We’ll give you an alternative but the alternatives were focused on not creating obstacles to work and not taxing employment. Now, when you say, when you quote there that, Ireland didn’t want Greece to get any benefit here, it wasn’t just Ireland that was really upset about the extent of what might be called a write down because Spain, France and other countries have been exposed to Greek banks in a huge way but we always said that debt reprofiling and rescheduling – such as happened in our case with the promissory note and interest rate reductions – were always things that we support and do support and did support in the case of Greece.”

Listen back to the full interview here

Previously: The Man With One Point

Greece In Our Time