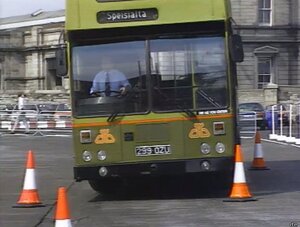 Who is your favourite Dublin Bus driver?

But there could only be five passengers

Spud1: “The best Dublin Bus driver I have ever known is the driver who wore a Santa outfit on the 130 each Christmas Eve. I’m sometime a bit down on Christmas eve, but when I see the Santa driver, it really gives me a great Christmas cheer! Shame health and safety and banned this from now on :(”

Declan: “The best Dublin Bus driver I have ever known is Tom Kavanagh (Conyngham Road Depot). Tom was known to ALL on his routes (78A & 79). You would always leave Toms bus happier then you were when you got on.
When his bus pulled up to the bus stop and you’d see Tom behind the wheel you knew you where in for a bit of craic He’d always be on the Bus PA telling people which stop was next, slagging people and i even remember him singing 1 morning
But the fondest memories would be when Tom would be on Community Duties bringing school groups, football teams or community groups on outings. He brought my football team down to Brittas Bay years ago and even managed grab a brand new City Swift single deck bus to bring us down. He said his bosses “didn’t know he had it so we were to keep it clean”
A truly Great Man and i was saddened to hear of his passing in 2012. Although a Waterford Man he was a Dublin Icon growing up in the 90’s. Here is a photo of Tom (He’s the one on the left).”

Diarmuid O’Gorman: “The best Dublin Bus driver I have ever known is my uncle Michael, who always drives with no shoes on. True story.”

Markler: “The best Dublin Bus driver I have ever known is the lovely tall chap with glasses that I see on the 16 route sometimes. He has any amount of time to help tourists coming from the airport and always has a beaming smile. Even when he has to swap driver he makes sure the next driver knows when to give each person a shout for their stop. He’s one of the first Irish people tourists might meet and is a ringing endorsement for Dublin.”

Jonjo: “The best Dublin bus driver i have ever known is a man called Tony, lets call him Tony H – I played football with him, smashing keeper in his day. Not sure what route he does now, but he used to drive these very buses – Dublin sight seeing tours – and gave all the shpeel etc over the microphone. Anyway, legend has it (well my mate, the other subject of this story, backed it up (not the bus, the story, wha wha) Tony was driving the bus full of foreign tourists through town when he spotted my mate Keith’s van. Upon pulling up beside the bus, he told all the passengers on board that Keith was a very famous retired Irish international footballer and told everyone on the bus to wave at him. Loves a laugh does Tony :)”

Scottser: “The best bus driver i know used to take us to Malahide from the sands in Portmarnock on the 32 as a nixer- 50p each. we’d get a good hour’s extra underage binge drinking in, instead of waiting for the 32a. alas, it was a bullsh1t-fuelled, vomit-stained walk home though.”

Five more passes to give away on Monday.

Yesterday: I’d Love To Do That

No cash, favours, rides, etc. given for this post