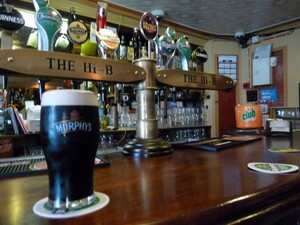 Having missed out – so far – on two modern ‘rites of passage’ – getting barred from Cork’s Hi-B bar and sued by Denis O’Brien – what is Dan Boyle doing wrong?

There is a bar in Cork. An excellent bar, a bar oozing with character. The size of an average living room, the Hi B is a bar that everyone should get to visit. It is an essential part of the Cork experience.

For those of us who grew up there it was not only a great place to be, it also represented a rite of passage that as young people we were expected to go through.

The owner of the bar was eccentric in the extreme. The way he might look at you, or the wrong answer to the most obtuse question he would ask, would determine if you were to be barred. Being barred became a badge of pride because eventually everyone was.

Everyone that is except me. It irked me and still does. Was I that bland, uninteresting and boring?

In recent weeks the unaccepted rebel in me has again been tormented, as I realise that I may be the last person in this country not to be threatened to be sued by Denis O’Brien.

And I can’t understand why. I’ve always understood the difference between creating wealth and accumulating it. I’ve known the advantage of knowing people who can convert public assets into private gain. I’ve especially understood that bullying is far more successful when you can pay the legal system to work on your behalf. Still no sign of a writ.

Even a writ by association would mollify me. I urge you Denis, whose perfect character has been so cruelly misrepresented, to cast your net further to include anyone who has ever been associated with those bodies, who have offended you and have refused to submit to your whims.

I have been a member of the Dáil’s Committee on Procedure and Privileges. I’ve written articles for The Irish Times. I’ve appeared on RTÉ news and current affairs programmes. I have liked and have reposted posts from the consistently brilliant Waterford Whispers News. I’ve even been known to provide copy for the notorious site Broadsheet.ie.

You and your legal minions have slighted me Mr. O’Brien. You have judicially challenged my sibling offenders, and have left me naked and isolated amongst my compatriots.
I am hurt and ignorant of what it is I haven’t said about you that you should marginalise me in such a way.

I haven’t been shy to state that I welcomed the findings of the Moriarty Tribunal. Especially those findings which showed that ethics in terms of public affairs and business practices had been fatally compromised.

I hoped, and still hope, that those findings could themselves be the subject of legal proceedings that can bring prosecutions against those whose actions have been contrary to the public interest.

I have condemned those who have criticised others whose decisions and analysis in this process has been questioned. Although I do have some sympathy for the view that any process that does not produce a result that isn’t personally acceptable is flawed. My fifteen year old self is especially agreeable to that notion.

I think where I may be going wrong is that I’ve never recognised that the value of a person could be measured in terms of currency or capital assets. It is human rather than economic values that should matter. Values like stoicism, maturity, generosity of spirit and even integrity, are those that really matter.

Unlike myself, Denis O’Brien was born in Cork. I wonder if he was ever barred from the Hi B? If he wasn’t then maybe we should form a club.

32 thoughts on “A Writ Walks Into A Bar”