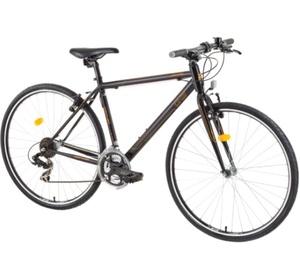 I’m painfully aware you don’t normally do this, but my bike was stolen from Thorncastle St, Ringsend, Dublin 4 on Saturday afternoon last. It wasn’t massively expensive, nor did it have any sentimental value, but it was new enough, so it’d be great to get it back.

The Gardaí came fairly quickly when I called them. As I was giving them the details a man came forward who said he saw it being stolen at around 3pm but he didn’t want to get involved. He said that the lad who took it was around 40, bald and looked like a drug addict. He used bolt crops to remove the two locks.

I know I don’t have much hope of seeing it again, but I said I’d chance my arm sending it in here. It hasn’t turned up on DoneDeal or any of those sites yet. It’s a black DHS Contura hybrid (as above).

34 thoughts on “Flavin It Away”