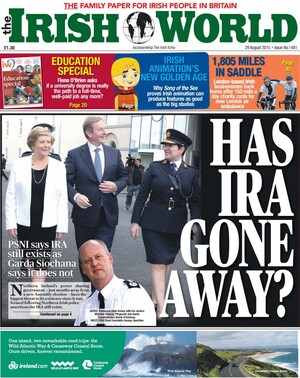 We know how necessary creative ambivalence and polite fictions have been to the peace process/political process and it is clear that a great many people – if by no means all – have made their accommodation, or peace, with that.

But when we tried to get a straightforward answer – yes or no, or yes and no – to two simple questions posed by email and by telephone to their respective press departments: Is the IRA intact and still active? Does it pose a threat to people in the UK and Ireland? we found that not one single agency or participant in the process – of the handful who did reply – could give us an answer.

We asked Downing Street, the Home Office, MI5, the Northern Ireland Office, the Department of Foreign Affairs, the Metropolitan Police, the US Embassy, an Garda Siochana, the Police Service of Northern Ireland, the All–Party Parliamentary Group on Irish in Britain and…Sinn Féin.

Those who did reply were Foreign Affairs, PSNI, US Consulate General in Belfast and the Gardai. The Gardai and the US Consulate told us it was a matter for the local police, the PSNI.

Foreign Affairs gave, understandably and predictably, a lengthy nuanced reply which did not actually answer the question with a ‘yes’ or ‘no’.

That evening, after a day of trying to get a response from the NIO, North Secretary Theresa Villiers, backing her PSNI Chief Constable’s nuanced, balanced take on recent events affected to be not at all surprised the IRA still exists and is active – albeit in a non-terrorist capacity.

William, It Was Really Nothing

It’s All Not Kicking Off