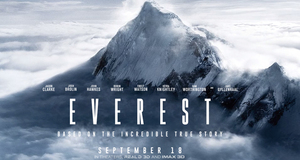 Everest is Icelandic director Baltazar Kormákur’s dramatization of the 1996 Mount Everest disaster; the deadliest day of the mountain’s history until the recent earthquake in Nepal. If you equate disaster movies with extinction-level annihilation, then recalibrate your expectations. By the recent standards of the genre, Everest is a slow burner. Kormákur doesn’t grab you by the ears, shove your head into carnage and shake your brain loose like Roland Emmerich or Michael Bay. But the human drama is somewhat diminished by a gaping hole in the narrative where the “why” should be. The question of what motivated these individuals to shell out huge money for a holiday with a fatality rate of one in four is left unanswered. I suppose you could say the same about a peak-season trip to Corfu. The impressive ensemble cast do their best under impossible conditions, but it’s difficult to emote in a blizzard. Besides, the real star of Everest is the mountain itself. Kormákur utilises the breath-taking alien landscape to the fullest, and delivers some intensely exhilarating sequences and haunting scenarios. Everest is a grand cinematic spectacle. Put the phone away and watch it on the biggest screen you can find. 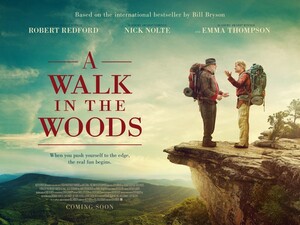 Next to the gargantuan Everest, A Walk in the Woods is a gentle Sunday stroll. Based on Bill Bryson’s memoir, Robert Redford plays the curmudgeonly travel writer as he attempts to walk the 2000-plus mile Appalachian Trail. His wife (Emma Thompson) is understandably concerned (“Can’t you just do this in the Volvo?”) and insists that he brings a companion on this absurd, ill-fated journey. The only blast from Bryson’s past willing to entertain the notion is the wheezing, overweight Stephen Katz (Nick Nolte). Katz is a force of nature bewildered by doors, chairs and other trappings of civilisation. The great outdoors is equally perplexing to Katz, as Nolte wanders through the film like a man capable of breaking nature itself. A Walk in the Woods is too whimsical and slight to provoke any extreme reactions, but it’s impossible to dislike. Redford has nothing left to prove and delivers a subtle, understated performance. The gentle comedy never tries too hard, and the begrudging camaraderie between Bryson and Katz develops in a manner refreshingly free from sentiment. A Walk in the Woods is a pleasant, inoffensive diversion.

Unpopular loser Dan (Jack Black) tries to gain the approval of people he hasn’t seen in over 20 years by convincing the most popular guy from high school (James Marsden) to attend an upcoming reunion. For some inexplicable reason, this involves the heterosexual family man engaging in some consensual afternoon delight with said popular guy. It’s probably best not to overthink this one – heaven knows that neither of the two writer/directors did. That guff such as this is being produced by Ealing Studios is positively inconceivable. Oh, how the mighty have fallen. Sad, desperate and pathetic, The D Train is best avoided altogether. Just like a real school reunion.

Mark Ryall will criticise movies for food. See WhyBother.ie for a closer look at some of this week’s new releases.