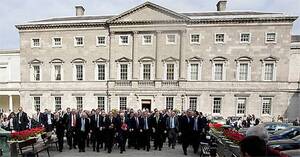 (with apologies to Myles na gCopaleen)

What contradictory emotional state is expressed by a political representative when asked that question?
(S)He is glad that question was asked.

What unnecessary adverb is added to express disappointment at being asked that question?
(S)He is really glad that question was asked.

What phrase, found in the future conditional tense, creates the promise that all will be right eventually?
The phrase is going forward.

What timescale is given to decisions made today eventually bearing fruit?
After the election after next.

What unit of intensity must people possess to be the beneficiaries of government policies?
They must be hard working.

What length and duration must an economic plan be?
It must be long term.

What sports analogy should no issue ever be?
A political football.

At what radial intersection is the country to be found at every coming election?
At a crossroads.

What serious consequence to important pacific endeavour follows criticism of any type, of the words or actions of the Sinn Féin party?
It damages the Peace Process.

What exaggerated expression of seriousness must be applied to every disagreement that occurs in Northern Ireland?
Such disagreements must always be described as a crisis.

What legal requirement is not said to exist, if individual approval has not been given in exercising access to the utility of water?
No consent no contract.

What sense of direction should apply to the payment of water charges?
No way

From where should this direction be applied?
From many places – days out in Dublin; football matches in Portugal; or swimming pools in Florida.

To what state of physical well being are many public bodies thought to be in their utilisation?
They are not thought to be fit for purpose.

In whose interest are all political decisions made?
The national interest.

Whose debt is not it?
It is not our debt.

Who is responsible for everything in the country that is working well?
The Government is.

Who is responsible for everything in the country that isn’t working well?
Somebody else is. Anybody else is.

What type of failure does government admit to?
A communications failure.

To what political party does communication failure most impact upon?
The Labour Party.

What alternative state negates a forced resignation of any high level public official, not being seen as a dismissal?
When such public officials retire.

To what extent does the six syllable word sustainability feature in Irish political debate?
To no extent at all.

What time projection for this nation are our young people?
Young people are our future.

What type of coagulant are our young people also considered to be?
Our life blood.

Why are undocumented Irish people in the United States considered different to economic migrants who come to Ireland?
They just are.

What is the relationship between Tribunals of Inquiry and subsequent convictions within the Irish judicial system?
There is no known relationship.

There is only one DOB.
Thou shalt take the name of the Lord thy DOB in vain.

If a war is over why does armed conflict continue? If an army has been stood down, why does a withered husk of an organisation still remain? If a tree falls in a forest, and no one is there to hear it, did it ever fall?
Don’t ask me. I’m not God.

50 thoughts on “The Modern Irish Political Catechism of Cliché”