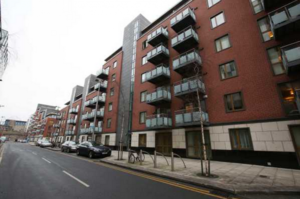 You may recall how Michael Clifford, in the Irish Examiner, reported in February how fire marshals had been on constant patrol in the Longboat Quay apartment development in Dublin since June 2014, following the discovery of major construction flaws that rendered the buildings firetraps.

This morning, Mr Clifford reported that the owners of apartments at Longboat Quay have been told that they must come up with €4million in less than a week – between €9,300 and €18,000 each depending on the size of their apartment – or Dublin Fire Brigade will have the building evacuated.

Mr Clifford reported that while a tender has been accepted for remedial works at the development on Sir John Rogerson’s Quay, no funding has been acquired to carry out the work.

Richard Eardley, resident and director of Longboat Quay management company, spoke to Áine Lawlor on RTÉ’s News At One about the situation facing the residents of Longboat Quay.

Richard Eardley: “Well the receiver has been very engaged throughout and they have said they’ve made a significant contribution so far, as have the DDDA [Dublin Docklands Development Authority]. It would be wonderful to think that Bernard McNamara might out of his munificence, come back and contribute towards a problem that he was part of creating in the first place.”

Lawlor: “Are you holding your breath on that one?”

Eardley: “No. It would be wonderful to see. Do I think it’s going to happen? I’m not sure. It would be wonderful if some pressure could be put on, because that is where the original fault lies. The problem is his development vehicle Gendsong went into liquidation so there is no legal recourse there. We’re dependent upon the other parties, the receiver who’s looking after the assets of Gendsong in the development and the DDDA who is still the owners of the common areas of the development to make their significant and very best proposals to sort the problem out.”

The Bit Paschal Donohue Read Out At The DDDA Hearing