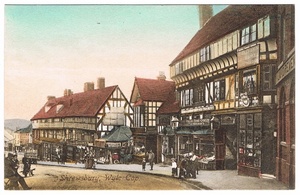 A dispatch from England’s green and pleasant land.

Is Jerusalem being builded there?

I am writing this on Wednesday. I’m in Shrewsbury, Shropshire, England. I’m unlikely to be writing those couple of sentences again. I’m here for a work opportunity that may or may not come into being.

It’s been a few years since I’ve visited our national inferiority complex next door. I’m going to take this opportunity to take stock.

Being part of the diaspora from the other side of the pond, I never got this need to compare ourselves with our larger neighbouring island and its dominant (domineering?) people.

Yet compare ourselves we have, save for that decade’s madness we underwent. That period of collective insanity, when the Editor of The Irish Times felt moved to write an op-ed piece, prematurely promoting us towards our new national obsession, when she claimed that Germany could learn a thing or two from Ireland about running an economy. And she didn’t mean it ironically.

Sitting on a riverside in England’s green and pleasant land, there are worse places to be than a bucolic haven like this.

One thing that is certain is that the British certainly don’t compare themselves with us. In talking up their economy the Tory government claims to be the fastest growing ‘major’ economy in Europe. Our figures may be inflated, and their true value might be questioned, but they are still a lot better than theirs.

A further irony is while their population has seemed to take a sado-masochistic delight in George ‘Gideon’ Osborne’s version of austerity, it seems to have done sweet damn all to reduce the indebtedness of its State.The British debt to GDP ratio is now worse than ours.

Of course the picture postcard pastoral image in front of me represents only a part of the reality of Britain today. It is a deeply unequal society, although God knows we have been doing our best to catch up. It constantly frustrates me  how in Ireland traditional political parties want to ape a British right wing agenda, whether that was pursued by Thatcher, Blair or Cameron.

Whether it has been the privatisation of public assets, private finance in providing public infrastructure at a far higher cost, or manipulating short term economic growth for the benefit of the few at the expense of the many; these policies expose a vacuity of thought through the provision of malice.

I fly in and out of Manchester. One of the still too few places that Cork Airport has connectivity with. Soon we are to be connected with Boston while remaining aloof from Berlin. Don’t get me wrong it’s an excellent initiative from Norwegian Air. I’m hoping they also will provide flights to and from Oslo. I would like to visit a country that gets the balance between society and economy right, better than we do.

Anyway back to Manchester. This is Gideon Osborne’s next project. He wants to create a Great Northern Powerhouse to rival London. This is to be done by making Regional and Local Government there bigger, less accountable, more distant from the people it’s meant to represent, more ‘business like’ in its application. Of course Irish policy making is already hooked on this brilliant intuitive thinking.

One last thing on England. The trains don’t run on time but at least they get there.

35 thoughts on “Home Thoughts From Abroad”