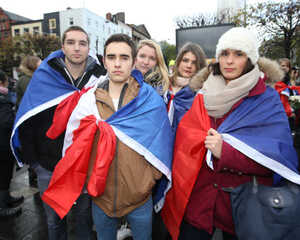 From top: Members of the French community in Ireland on O’Connell Street, Dublin on Saturday; Dr Julien Mercille

The causes of terrorist attacks have nothing to do with the left or the right.

The terrorist attacks in Paris killed more than 120 innocent civilians. They were the latest in a series “Islamic State” (Isis) attacks that killed 43 people at a market in Beirut, 26 at a funeral in Baghdad, and 224 aboard a Russian plane.

The events are understandably tragic and deeply saddening. However, they are not isolated, even if they have received disproportionate media coverage. For example, thousands of Iraqis have died because of Isis terrorist bombings. The number of civilian fatalities in Iraq has increased from 4,623 in 2012 to 9,473 in 2013 and 17,045 in 2014, according to Iraq Body Count , an independent website. A large proportion of those are attributed to Isis.

Two questions have dominated the airwaves: why did this happen, and what should be done about it?

The conventional view is that this happened because of Islam, which is spreading violence, and we need to retaliate militarily.

For example, in his front-page Sunday Independent article, Brendan O’Connor blames Islam, which “literally means submitting” — but he declares that Westerners “will not submit”. He asserts that Islamic networks and attacks, after all, “cannot operate totally in secret and totally without some support from communities”. The implicit message is that we should thus be suspicious of Muslim communities. He also argues that Muslims themselves should do more to stop religious violence.

He is not alone in thinking this. Also writing in the Sunday Independent, Eilis O’Hanlon said the same about “the Left”, stating ]: “We in the West are, ultimately, blamed [by “the Left”] for every evil act committed against us by Islamic fanatics”. In short, “excuses will always be made for terrorists when they spill our blood”.

But those statements are so factually incorrect that one wonders if their authors have ever read anything on the subject of terrorism or Islam. I don’t have space here to address every aspect of the issue, but let’s get the basics out of the way.

First, outlining causes of terrorist attacks has nothing to do with “the Left” or “the Right”. It’s just about the facts.

The fact that the formation of Isis goes back to George W. Bush’s invasion of Iraq is not even controversial. So is the fact that Western military intervention under the “Global War on Terror” has increased terrorism worldwide. This shouldn’t be too surprising for anybody who understands international affairs. If a country bombs another, it is likely that some groups and individuals from the destroyed and occupied country will seek to retaliate.

There are many experts and analysts who have stated the same.

For instance, the CIA consultant and academic Chalmers Johnson explained the process through the concept of “blowback”, which denotes the unintended consequences of foreign policy interventions.

In the Irish Times, Lara Marlowe wrote yesterday that “there is a straight line between Bush’s invasion of Iraq and France’s torment”.

Barack Obama stated in an interview, saying that Isis is “a direct outgrowth of Al Qaeda in Iraq that grew out of our invasion, which is an example of unintended consequences”.

Tony Blair also admits that Isis would not have emerged without the invasion of Iraq. When asked if the Iraq invasion had been the “principal cause” of the rise of ISIS, he answered: “I think there are elements of truth in that”.

The process by which groups like Isis emerged out of the invasion of Iraq, evolving from al-Qaeda’s activities there, has been well described by the journalist Patrick Cockburn in his book The Jihadis Return.

Many Isis leaders are former Iraqi officers in Saddam’s military. When the US invaded, they disbanded the army and this resulted in thousands of disgruntled soldiers, now unemployed and armed, left to fend for themselves.

This Washington Post article is excellent at explaining how they joined Isis and how they came to play prominent roles in its military strategy.

Also, some Iraqi insurgents who would become Isis leaders were incarcerated in an American prison in Iraq called Camp Bucca for a few years during the occupation.

As the Washington Post reported, “Camp Bucca provided a unique setting for both prisoner radicalization and inmate collaboration—and was formative in the development of today’s most potent jihadist force”, Isis. The radicals’ time in prison “deepened their extremism and gave them opportunities to broaden their following” so that “the prisons became virtual terrorist universities”.

The above strongly suggests that more bombing will not reduce the likelihood of further attacks in the West. In fact, more bombing will likely lead to more savage acts of retaliation in Europe. Therefore, to stop the bombing should be a first step towards a solution.

There are then other steps that should be taken, including to stop supporting Western allies such as Saudi Arabia and the Gulf monarchies, which spread extremist interpretations of Islam and provide support for a range of violent groups in the region. Then, other hot issues in the Middle East that feed resentment should be dealt with through diplomacy, including Israel’s occupation of Palestinian lands, the war in Syria, the wreckage in Iraq and Afghanistan, etc.

Sure, those steps won’t solve every problem. But at least they will go a long way towards reducing the violence, contrary to more military action, which will have the opposite effect.

To conclude, here are two competent analysts who I think are good sources to follow current affairs in the Middle East:

1. Juan Cole is a professor of Middle East history and expert on Islam and religion. He writes an excellent daily blog called Informed Comment ].

2. Glenn Greenwald is the journalist who received the national security documents leaked by Edward Snowden. He writes at The Intercept here.