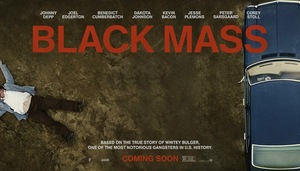 Johnny Depp can’t resist another dip into the dress-up box for this Boston crime drama, but the results are far more impressive than any of his recent output would lead us to expect.

Black Mass spans the 25 year-period when James “Whitey” Bulger (Depp) headed the notorious Winter Hill gang. Beginning in 1975, Bulger forges a mutually beneficial alliance with his childhood friend and FBI agent James Connolly (Joel Edgerton), whereby Bulger feeds information on rival gangs to the FBI, and in return his illegal activities are overlooked. Bulger takes out his competition and Connolly gets promoted, but there’s trouble ahead, naturally.

Scott Cooper (Crazy Heart) finds some inventive ways of presenting shots and transitions with a creative flair that keeps things interesting. There is however a noticeable slump in the final act. The factual basis of the material often ties the film down and prevents it from realising the dramatic potential of The Departed or The Town.

It must be said that as Bulger’s powerful diplomat brother, Benedict Cumberbatch fails to convincingly pahk his cah in hahvahd yahd, but the rest of the supporting cast (including Kevin Bacon and Jesse Plemons) are terrific. Besides, this is Johnny’s gig, and he is utterly terrifying. He brings an unpredictable, savage intensity to the role that is mesmerising. It’s a pleasant surprise to see Depp acting again, because he’s rather good at it. With sequels to Alice in Wonderland and Pirates of the Caribbean on the horizon, perhaps we shouldn’t get used to the idea.

Note: Black Mass is currently on limited release. It will be on general release from 25th November.

With films such as Irréversible and Into the Void under his belt, we should be well accustomed to Gaspar Noé testing our levels of patience and endurance, but here the filmmaker crosses the line from provocation to outright trolling.

Yes it’s shocking, but for all the wrong reasons. Clunky dialogue such as “I’m just really in my head right now” and a risibly pretentious voiceover give the impression of a bad student film. The first-time actors are fine at standing still, staring and autoerotic activities such as ejaculating, but their inexperience is woefully apparent in scenes where speaking (or actual acting) is required.

It’s all very tiresome. The 3D sex is a gimmick, and can’t disguise the fact that Noé has nothing to say. Tommy Wiseau should watch his back. Love may yet displace The Room’s reputation as the “Citizen Kane of bad movies.”

Also on release from Friday: THE HUNGER GAMES: MOCKINGJAY PART 2; THE DRESSMAKER, THE PERFECT GUY.