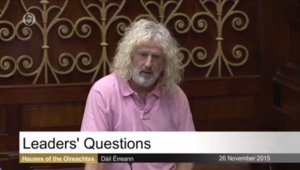 You may recall previous claims made by Independent TD Mick Wallace in the Dáil about the sale of Nama’s northern Ireland portfolio, Project Eagle.

During Leaders’ Questions in the Dáil today, Mr Wallace made further claims, alleging that Nama gave him an ‘untrue’ answer in relation to a question he asked about Nama’s former head of asset recovery, Ronnie Hanna.

“Ronnie Hanna was part of a cabal to seek payment for affecting the biggest property deal in the history of the State.”

The Irish Times has since reported a Nama spokesman saying:

“Deputy Wallace has today falsely accused Nama of giving untrue answers to his questions. He is wrong to do so.”

Meanwhile, in response to his claims, Tánaiste Joan Burton told the Dáil:

As somebody who was involved in the building trade, I know from some of the public records and the media that he suffered. This does not mean that because he feels a very strong personal sense of grievance, which I understand, that his claims of wrongdoing against NAMA stand up.

From the Dáil proceedings…

Mick Wallace: “I have been co-operating with An Garda Síochána on a number of issues relating to NAMA and it has been back to me regarding some of these issues. As the Tánaiste is aware, I have asked many questions in the Chamber about NAMA but I have not got many answers. In fact I have got none. I have put some of the questions and others to NAMA directly and I have got answers from it, some satisfactory and some not. One of the questions I asked about Project Eagle was whether Ronnie Hanna, along with Frank Cushnahan or David Watters, ever met any US investment fund personnel. NAMA’s reply was “No”, that Mr. Hanna had no such meetings with these individuals. We now know that Ronnie Hanna, head of asset recovery in NAMA, did meet at least one of the US investment funds. NAMA’s answer to my question is not true.”

“PIMCO pulled out of the Project Eagle deal because its compliance department would not agree to the success fee. Cerberus replaced it and paid the success fee. What would PIMCO have got for this fee? What did Cerberus get for the fee? It got insider information and the ability to affect the deal. An executive of NAMA, Ronnie Hanna, was part of a cabal to seek payment for affecting the biggest property deal in the history of the State. The three individuals, Ronnie Hanna, David Watters and Frank Cushnahan, had information above and beyond what was available in the data room. David Watters had reviewed the business plan for many of the debtors.

An Leas-Cheann Comhairle Michael Kitt: “The Deputy is naming many names…”

Peter Mathews: “We need them.”

Kitt: “… and it is a long-standing convention that accusations should not be made against people outside of the House.”

Wallace: “These are all in the public domain.”

Robert Dowds: “Go before the Committee of Public Accounts on this.”

Wallace: “Frank Cushnahan was looking after the political side in the North and Ronnie Hanna was looking after matters inside NAMA in Dublin. We are not talking about Belfast; this is Dublin. This is at the heart of NAMA in Dublin, and this is on the Tánaiste’s watch. The Taoiseach assured us that NAMA had dealt comprehensively with all matters put to it at the Committee of Public Accounts, but what is this worth now? We need an independent commission of inquiry. I realise that Fine Gael certainly does not want one, but the Tánaiste is the leader of the Labour Party and she should ensure there is an independent commission of inquiry.”

Tánaiste Joan Burton: “With regard to Project Eagle, I am advised the loan sale was executed in a proper manner, and despite all the different charges the Deputy has made, and charges against named individuals who are not in a position to comment or defend their good name in the House…”

Burton: “…but the Deputy has named them nonetheless, I am told the facts are there are no claims of wrongdoing against NAMA. However, the Deputy clearly has issues with regard to the people he has named.”

“Clearly, at the base or back of his particular complaints is probably his own unfortunate experience, to which he has referred on many occasions. Understandably, he has a very strong vested interest in, and probably even stronger feelings about, what happened in the context of the collapse in the values of properties when the economy and property valuations collapsed. A portfolio worth almost €6 billion, like many people’s personal domestic houses, lost 60%, 70%, 80% or 90% of its value. If the Deputy is saying this loss of value can be attributed entirely to NAMA, and not to the actual impact of one of the most devastating property crashes in the world, then I want to acknowledge he has suffered.”

Mathews: “It was a banking crash that led to a property crash.”

Burton: “As somebody who was involved in the building trade, I know from some of the public records and the media that he suffered. This does not mean that because he feels a very strong personal sense of grievance, which I understand, that his claims of wrongdoing against NAMA stand up. I said to him before on this that NAMA is answerable to the Committee of Public Accounts. I strongly advise the Deputy to take the issues he has raised here, if they are additional to the issues he has already raised, to the Committee of Public Accounts and seek to have them examined there. He knows as well, because we discussed it on a previous occasion, that in the North the Comptroller and Auditor General there is conducting a value for money review into the Northern Ireland sale, and I strongly recommend that the Deputy seeks to get the findings of this report and what it will have to say.

Mary Lou McDonald: “That report is happening here and not in the North.”

Kitt: “Under Standing Order 59 there is a mechanism whereby a Deputy can give prior notice to the Ceann Comhairle concerning matters in the nature of being defamatory and Deputy Wallace should avail of this. I ask him not to name people who are outside the House.”

Wallace: “Any allegations I have made against NAMA have zero to do with my business. I never had interaction with NAMA through my business. I did not go into NAMA. The Tánaiste seems to be deliberately failing to interpret what I have said. I have given her some new information and I have outlined how I was told untruths by NAMA when it was questioned. The Tánaiste does not seem to have a problem with this. This is shocking.”

Wallace: “It has nothing to do with me; it has to do with the people. NAMA has failed to serve them properly. There are serious question marks. An executive of NAMA, Ronnie Hanna, in Dublin, deliberately interfered in the process. Does the Tánaiste not have a problem with this? Is she just going to let this flow on and not look for a proper independent commission of investigation into this? Is this possible? I find it hard to credit.”

Eric J. Byrne: “Say it before the Committee of Public Accounts.”

Dowds: “Go before the Committee of Public Accounts on this.”

Wallace: “I will put a number of questions to the Tánaiste, and she should get answers to them from NAMA. It might tell her the truth. What date and time and to whom was the Fortress bid submitted? What date and time and to whom was the Cerberus bid submitted? Were the bidders advised that the bids were to be the best and final bids? Were they advised that the reserve was £1.24 billion? When and by whom was Fortress advised that its bid was not successful? Did Fortress offer in writing or verbally to increase its bid? Mr. Hanna resigned six months to the day after the Cerberus deal went through. Why?”

Arthur Spring: “Does Deputy Wallace know the answers to any of those questions?”

Burton: “I appreciate the Deputy’s concern in the matter, and if he has had no contact with NAMA, I accept that, but I certainly have seen in the public media and I am aware that he was a very fine developer and builder who lost out, as so many others did, in the course of the property collapse in Ireland.”

Clare Daly: “What has that got to do with it?”

Burton: “The Deputy has set out on Leaders’ Questions a series of very detailed questions relating to a specific institution – NAMA – that is answerable to the Committee of Public Accounts. The Deputy is, I suppose, using a trick deployed by lawyers. He is asking a question and he is very confident he knows the answer to it but I have had no notice of it.”