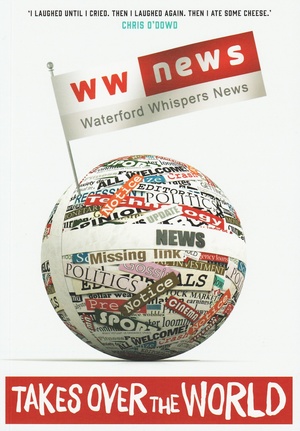 The already-acclaimed buke from the people behind the popular website.

Sending up Irish politics, poking fun at megalomaniac billionaires, and extracting the Michael out of everyday life, here in Ireland and around the world WWN’s new book – Waterford Whispers News Takes Over the World is the greatest literary achievement since James Joyce wrote down his weekly shopping list on a bit of parchment and handed it over to Nora Barnacle.

WWN’s new book brings you brand new stories and features as well as favourites such as Uncle Ben shot dead by US police, Waterford Crystal Meth announces 45 new jobs and New ‘Silage’ body spray for single farmers, plus satirical spins on the Marriage Referendum, 1916 commemorations, the US Presidential Election, ISIS and the Catholic church.

We have two (yes TWO copies) of WWTOTW to giveaway.

To enter, simply create a Waterford Whispers-style headline for the Easter Rising 1916.

When I Think Of Bray

Tender Is The Nitro

111 thoughts on “Putting Waterford On The Map”