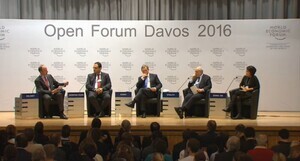 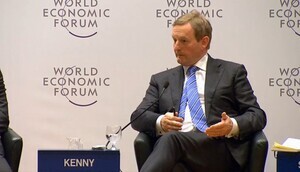 “From our point of view, obviously to get foreign direct investment into the country you need particular principles. And in Ireland the corporate tax rate was always 12.5% and is 12.5% and will remain so and that’s across all sectors, and across the entire country. And because of reputational damage being done, we got rid of the so-called Double Irish concept which was an issue of taxation that Joseph [Stiglitz] has often written about and the stateless concept. And now we have a 12.5% corporate tax rate and we’ve introduced the first OECD fully compliant knowledge patent knowledge box set at 6.25% for qualified research and development.

But that’s the taxation end of it and it’s attractive and it’s competitive but it’s not the real reason that people really want to invest in the country. When you talk to them, the real reason is the talent pool, the creativity and the ingenuity and the imagination of young people and it’s the same for every country because you’ve got this capacity.

…For instance, a voluntary movement started in Ireland, called Coderdojo – the writing of code for computers and this has taken off and every weekend you have people who voluntarily teach people how to write code that makes, that makes computers tick, this has gone international…

Meanwhile, following a question from the audience about ‘organised tax evasion’ in Europe and its impact on social inequality, Mr Stiglitz said multinationals have a social responsibility to pay their taxes.

“Apple, in the United States, has become the poster child for using ingenuity to take advantage of these loopholes and we have had a very big effort to try to have a UN movement to address this issue. The view that we had was that the countries from which the tax avoiders were coming, like Apple, should not, those governments should not be deciding how to structure a tax regime because they will structure a tax regime that benefits their companies and not benefits the entire world but the United States unfortunately – supported by several European countries – argued that the tax avoiders and evaders should get together and write the rules so they could continue the tax evasion. So I was very disappointed with my own government on this….

“Ireland is a case in point where Apple has been mentioned. Apple employ 5,000 people in Ireland. They pay their taxes. But no special deal is done with any company by our revenue commissioners over the years and that’s a case obviously, the European Commission are looking at, not just in the case of Ireland but in other countries as well. But obviously the European Council consider this, the OECD have carried out their BEPS analysis, Base Erosion and Profit Shifting and for one country, we’ve been very much forthright and up for that because clearly, the taxation system, the legal systems are very far behind the digital systems.

So, we don’t do brass plate companies in our country. So you have a plate…Apple employ 5,000 people, who go to work everyday. Obviously if you manufacture something there and you sell it in France or Italy, the intellectual property is invested elsewhere, these are the complexities and the challenges that are there.

I just want to make it clear that, from our point of view, we defend 100 per cent the authenticity of the way we do business with international companies and there was a lot of talk, as you know Joe [Stiglitz] in the United States about Ireland being a tax haven which was completely false, baseless and untrue and has been dealt with very clearly.

And that’s why in budgets we got rid of reputational perceptions with the Double Irish concept …. and I would absolutely above board and out front for everybody so just to make that point.”

Anything Good Behind The FT Paywall?

Where Have All The Good Guys Gong?

When Love Comes To Town

51 thoughts on “Meanwhile, In Davos”