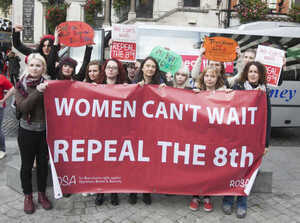 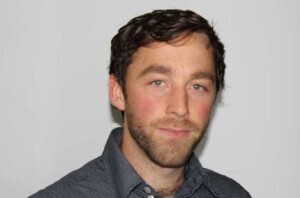 Time to end Ireland’s ‘out of sight, out of mind’ hypocrisy on abortion, bring us into the 21st Century and Repeal the 8th Amendment.

Ten women (and some with their partners) will have to take a plane or ferry today and travel to England to have an abortion.

Last year over 3,700 women had to travel to the UK while over 150,000 have had to take a plane or boat to England or another country to have an abortion so that Catholic Ireland can remain guilt free while her traumatised women and their partners are forced to take the journey of shame to another country

This is the reality of hypocrisy Ireland.

Women and their partners and families face a personal crisis; whether it is a deeply tragic pregnancy such as fatal foetal abnormalities or becoming pregnant because of rape or a crisis pregnancy, this ‘great little nation’ deals with it by offering no support but to export the ‘problem’.

The Irish constitution and the failure of the state and governments to provide supportive legislation has turned our personal difficulties into a criminal act. It is the Eighth Amendment (Article 40.3.3 of the Constitution) which criminalises abortion as it gives the right to life to the foetus and places it on equal footing with that of the woman.

It is actually illegal for a woman in Ireland to have an abortion even if the foetus she is carrying will not survive outside the womb.

It is also illegal for a woman who gets pregnant from rape to have an abortion in Ireland.

A total of 197 women and girls who went to rape crisis centres in 2013 were pregnant as a result of rape. One in four chose to have an abortion. They had to travel abroad for an abortion or take abortion pills illegally in Ireland.

Up until 2013, women had no legal right in Ireland to an abortion even if their life was at risk. We saw the result of this when Savita Halappanavar was allowed to die in October 2012. After the public outcry and protests the Government responded by enacting the Protection of Life During Pregnancy Act but this retained the criminalisation of abortion on all but one ground (when a woman’s life is at risk). So women having an abortion or a doctor, or anyone helping a woman have an abortion outside of that circumstance faces a prison sentence of up to 14 years.

The right to travel abroad for abortion allows official Ireland to get on with business as usual irrespective of the mental, financial and sometimes physical suffering imposed on these women and their partners.

They add layer after layer of control and punishment because those who travel to have an abortion can’t talk about it – not even to closest friends and family – not even amongst themselves.

But thankfully this is changing. The silence is being broken The stigma of abortion is being broken down as more and more people such as journalists like Roisin Ingle and comedian Tara Flynn speak publicly, to their friends and family about their experience.

New websites are being set up to share stories about abortion (for example ShareYourAbortionStory) or the X-ile project which is an ongoing online gallery to give a much-needed face to women who have effectively been exiled from Ireland and ignored due to unduly strict abortion laws and demonstrate that those who choose to travel to have an abortion are responsible, ordinary women and are our neighbours, friends, colleagues, mothers, daughters and partners.

Kitty Holland has written in the Irish Times about women undertaking abortions at home with imported medication from a website in the Netherlands.

One women she spoke to explained how she was ‘working part time and trying to get college projects finished’ and ‘the thought of having a child on a meagre wage, living in an apartment I share with my mother . . . I wouldn’t be able to finish my education or look for work. What kind of start would that be for a baby?”  She was afraid to seek follow-up medical advice after taking the abortion medication at home.

A few weeks ago, Fergal Malone, the head of the Rotunda Maternity Hospital spoke on the RTÉ’s Late Late Show about the tragedy of parents of babies with fatal foetal abnormalities having to “courier” their child’s remains home because of Ireland’s restrictive abortion laws.

Opinion polls (including Newstalk’s latest poll last week) are consistently showing that a majority (67%) favour decriminalising abortion and a substantial majority (80%) in cases of foetal abnormalities or rape while a majority (75%) also favour holding a referendum to repeal the Eighth Amendment.

Those favouring access to abortion as women chose has doubled in the last decade (with a majoring of 25-34 year olds in favour) while those opposed in all circumstances has halved and is now down to just 7%. 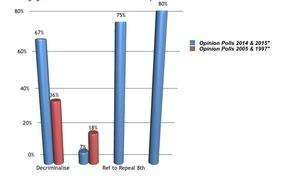 Amnesty’s #notacriminal campaign (see below) shows how difficult it is to get a legal abortion in Ireland.They highlight that the lack of legal abortion is a denial of women’s human rights and the choice to have an abortion should be an entirely private matter decided between a girl or woman and her doctor. 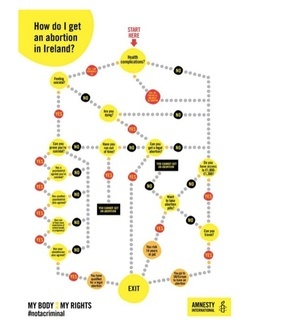 An important factor in building support for the Repeal the 8th Amendment is for men to speak out in support and tell their stories about experiences of abortion.

Restriction of abortion is a broader human rights issue that discriminates and hurts men as well.Men face criminalisation for helping their partner or are often unable to travel with and support their partner due to difficulties paying for a second set of flights. The Irish constitution denies them the ability to be with the person they love, and playing an active role in being present to support their partner during a medical procedure.

This change in the public mood in favour of de-stigmatising and decriminalising abortion and ‘Repealing the 8th Amendment’ is being led by thousands of pro-choice activists and campaigners across the country.

The numbers attending the Annual ‘March for Choice’, held in September for four years now, have been growing with 10,000 attending in September 2015. While The Coalition to Repeal the 8th Amendment, includes over 50 organisations including feminist, human rights and pro-choice organisations, NGOs, trade unions, and political groups. It has written to all General Election candidates to pledge to calling for a referendum to repeal the 8th Amendment.

We are realising that equality means actually implementing equal rights for everyone.

And that includes women’s reproductive rights to have control over her own body – including the right to abortion in Ireland.

So when a politician comes knocking on your door in the next few weeks make sure you ask them what their position is. Let them know Ireland is changing and that its time for safe and legal abortion in Ireland so that women’s lives, health and choices are respected and protected.

Dr Rory Hearne is a Senior Policy Analyst with TASC, the Think-Tank for Action on Social Change. He is also an independent candidate for the Seanad NUI Colleges Panel. His column appears here every Wednesday and he writes in a personal capacity. Follow Rory on Twitter: @roryhearne

92 thoughts on “Ending The Hateful Eighth”