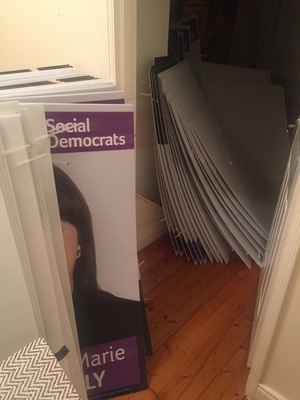 From top: Posters in the hallway; Anne Marie McNally

You may love them, hate them or want to tear them down.

But for every General Election candidate they are vital.

‘Tis the season. It’s upon us and there’s no escaping it. Wherever you look for the next three or so weeks you are going to see election posters.

Big ones, sparkly ones, boring ones, horrific ones and eye-catching ones and they’ll have one objective…to cement the name and face of the person into your brain so that it may leap out at you from the ballot paper come polling day.

Those who hate them will tell you that they represent nothing more than litter, that they are unnecessary and wasteful and that they do not influence voters in any way. Those who love them will point to the academic research which shows they are a vitally important visual communications tool deployed worldwide during election season because they works. There is no escaping that fact.

Do you honestly think US Presidential election strategists would bother with them for example if there wasn’t substantial evidence to prove their worth to a campaign?

As far back as the 16th Century Protestant Reformation posters were being used to communicate messages in a visual way in order to influence decisions. Many people may argue that in this modern era of social media the purpose of posters is obsolete. They’d be wrong.

By and large the people who you will find giving out about election posters are doing so on social media – so they have their access to information already locked down and therefore posters may well be unnecessary for them.

For the vast majority of other potential voters though, the posters may be the only visual representation of exactly who is running in their area and what choices they have available to them.

I recently postered for the first time. I was having a public meeting as a first time candidate and I wanted to spread the word in as an effective and cost efficient way as possible. Posters allowed me to do that. Within two days of them going up my canvasses changed substantially.

Every second interaction involved some variation of ‘oh yes, I saw your posters, you’re the anti-corruption person’. My little old posters had done their job spectacularly and even I, who was fully aware of the academic research on this issue, was taken aback at the impact those few posters had on my recognition factor and also on how people approached interactions with me. There was almost a familiarity – ‘I’ve seen your face loads so I feel like I know you’.

As a candidate I wish it were not so. For this General Election campaign I will have near bankrupted myself to fund the quantity of posters needed to reach across my constituency which houses a population of just over 110,000 people.

My house currently resembles a print works and you have to squeeze past bundles of the things in order to get a drink of water or climb into bed.

By the time you’re reading this there’ll likely be groups of my friends driving around, balancing precariously on ladders and hanging from lampposts in a knot of cable-ties. They’ll all have taken the day of work to poster for me and my gratitude will never be enough to repay them.

So do I wish posters were not important and that I didn’t have to undertake the postering campaign? Yes, I absolutely do! But I also realise that wishing for the easier option might be tempting but it’s unlikely to bring success.

While lots of Labour candidates chose to poster illegally on Monday night by going ahead and erecting them long before the election was called and it was illegal to do so, others among us sat at home and looked around at the piles of posters cluttering the rooms and knew that there they would stay until it was legal and sporting to hang them.

We can’t all be so cavalier about paying €150 fine per poster after having to sweat blood to buy the things in the first place! I wonder about the candidates who can, I really do.

Anne-Marie McNally is a political and media strategist working with Catherine Murphy TD and is a General Election candidate for the Social Democrats in the Dublin Mid-West constituency . Follow Anne-Marie on Twitter: @amomcnally

72 thoughts on “In Defence Of Posters”