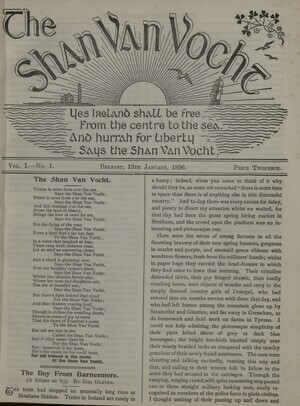 The first woman-run newspaper in the world.

We are proud to present another wonderful historical journal from the National Folklore Collection, University College Dublin [at link below]

​The Shan Van Vocht was a national monthly magazine, founded by two Belfast poets, Alice Milligan and Anna Johnston (later Anna MacManus), which ran from 1896 until 1899.

As the centenary commemorations of 1798 approached, many issues included articles, short stories, oral histories, and poetry relating to the United Irishmen’s rebellion.

.In 1899, when The Shan Van Vocht ceased publication, its subscription lists were transferred to Arthur Griffith’s United Irishman.