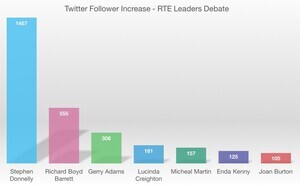 Grainne Faller at the Insight Centre for Data Analytics writes:

Researchers from the Insight Centre for Data Analytics have been crunching the Twitter numbers as part of their Insight4Elections data analysis project and they found that Stephen Donnelly, co-leader of the Social Democrats gained a remarkable 1,457 Twitter followers last night, about two thirds more than his closest rival Richard Boyd Barrett of People Before Profit who gained 555.

Yesterday: Every Manifesto At A Glance