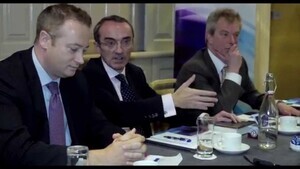 The Hibernia Forum [advocacy group ‘dedicated to the principles of a free market’] will hold a press conference this afternoon to present a document entitled Ten Questions Our Politicians Must Answer.

Not only are rash and reckless promises being made by all parties, despite the precarious global situation, but nothing is being done to address major structural long term problems in Irish society, such as the inefficient and high spending on health, the international threat to our low corporate tax and a massive future pension liability, which we cannot afford.

Public Pensions
Public pensions are accounted for on a pay-as-you-go basis. This means that pension contributions paid today do not fund investments to fund tomorrow’s liabilities: instead they fund today’s liabilities. This is the funding model of a pyramid or Ponzi scheme. If applied in the private sector it could result in the imprisonment of those responsible on grounds of fraud.

The Gap in PRSI System
A December 2010 actuarial review of the Social Insurance Fund carried out by KPMG for the Department of Social Protection concluded that the present value of the unfunded liabilities of the PRSI system was then €324 billion. Given that real interest rates have fallen significantly since 2010, it is likely that an updated actuarial estimate of this liability might be significantly higher than €324 billion.

The Gap in Public Sector Pensions
The total accrued liability in respect of Public Service occupational pensions was estimated at €98bn as at December 2012. Given that real interest rates have fallen significantly since 2012, it is likely that an updated actuarial estimate of this liability might be significantly higher than €98 billion notwithstanding the efforts of the Department of Public Spending and Reform to reduce it.

The National Debt
While reported national debt was about €183 billion at the end of 2015, the actual financial liabilities of the state were (if we add the unaccrued Social Insurance and Public Sector Pension liabilities) actually much higher at €636 billion.

Political Reform
In order to promote the likelihood that general elections produce a stable government and in order to reduce the risk that governments may be forced to favour certain constituencies over others (in order to procure the votes of their Independent TDs) consideration should be given to reducing every Dáil constituency to just three seats.

25 thoughts on “Debt In The Afternoon”