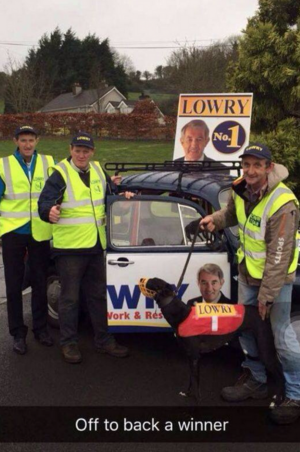 On Michael Lowry’s Facebook page in the last hour…

A great photo to receive! Thanks to the Kenny brothers Joseph, John and Brendan.

The TD’s arguments for stopping his trial were “devoid of any substance”, Mr Justice Seamus Noonan said.

The judge today refused Mr Lowry’s application for orders restraining the DPP proceeding with the prosecution of the TD before Dublin Circuit Criminal Court.

He also refused to order the TD be tried in his native Co Tipperary rather than Dublin.

Far From The Tree

15 thoughts on “Slender, Smooth-Coated With A Flexible Spine”