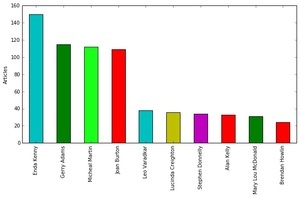 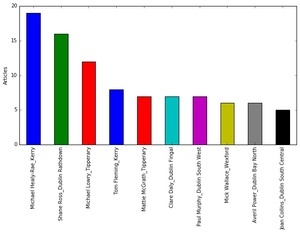 Researchers from the Insight Centre for Data Analytics have been tracking media coverage of candidates as part of their Insight4Elections data analysis project.

Unsurprisingly, Enda Kenny tops the pile with 150 articles to date across the tracked outlets. Gerry Adams notched up 115. Micheál Martin was in third place with 112, while Joan Burton is next with 109.

The gulf in coverage is perhaps unsurprising but will strengthen the argument of the smaller party leaders that they are not getting equal access to the electorate when it comes to the main media channels.

Insight4Elections is a publicly available web tool where users can crumnch the numbers for themselves. Click here

Previously: Every Manifesto At A Glance

10 thoughts on “Who Kept The Coverage Going?”