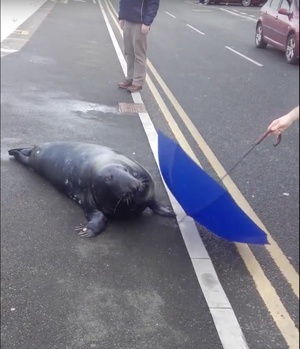 I was driving to the Fishman, local fish shop in Wicklow Town and happened upon a seal who had made his way to the shop. He swam up the Vartry River, jumped up onto the foot path and made his way across to the Fish Shop. Apparently this has become part of his daily routine at high tide.

To clarify, the lads at the fish shop were worried the seal would be hit by a car. Some days he apparently makes it into the shop.

The lads usher him back across the road. Each time they  get a bucket of fish guts and throw it into the river.  The seal then jumps back in, has his feed, and back up onto the path a cross the road and the cycle continues...only rolling to an end when the seal has had its feed.

The lads also informed me it has become worse as of late, as the seal now has a girlfriend so he is also feeding her and showing off.…well worth a visit at high tide.

I, For One, Welcome Our new Tripod Fish Overlords

‘Take The Fish So I Can Lie To The Kids’