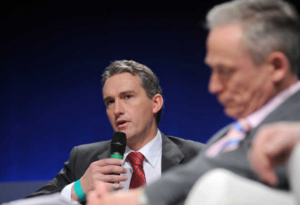 Mr Barry lost his seat at the weekend.

Now he wants Enda Kenny to lose his leadership of Fine Gael.

Mary Wilson: “You lost your seat in Cork East on Saturday. Do you look at your leadership and party headquarters? Did you feel let down?”

Tom Barry: “Well, hi Mary. Certainly, you know, while we all ran very good campaigns on the ground, there was certainly no welcome within our party for people like myself who were outspoken. If you offered constructive criticism, it was almost dismissed. And there seemed to be a willingness to look at focus groups and advisors rather than look at the people who were dealing, you know, the elected representatives who were dealing on the ground with people. And it’s very disappointing, because, you know, we all have a lot of experience to offer and, you know, we have obviously suffered because of that. And I would say now, you know, for people who are saying, ‘let Fianna Fail and Fine Gael go in together’, I mean we did not get a mandate to govern this time and, you know, give the people what they voted for. They’re looking for an alternative government – whatever it’s going to bring, be it Fianna Fáil, Sinn Féin and Independents because the people who came out last week – shouting and roaring and saying they had all the solutions to all the problems that we know are there – they need to come out today with those solutions and say they want to form a government to actually implement those solutions.”

Wilson: “We’ll get to formation of Government in a moment. Stay with your years as a deputy and the Fine Gael parliamentary parties where every TD is entitled to have his or her say. You say there were things you wanted to say. Enda Kenny has always been seen as a chairman, a very good manager of the party. Was he not listening to you?”

Barry: “Well, I mean I often spoke up and criticised at meetings…”

Wilson: “What did you criticise?”

Barry: “Well, initially, I suppose, the very first one where we had a problem was when Kevin Cardiff made such a mistake in finance and I asked for him to be removed. He wasn’t removed, he was promoted. And I took that very bad because I just felt it gave the wrong, the wrong…”

Wilson: “The wrong impression… And what else, for example, around the setting up of Irish Water, were you a supporter of that?”

Barry: “Look, I mean, I’ve run a business for many years and I’ve paid for water. I argued about how they could do it many different ways but, you know what, they were pulling in solutions day after day, trying to manage a situation that was getting out of hand but none of us were asked for our opinion. We were never given…”

Wilson: “What about the issues of health on the ground, and you’ve had issues of overcrowding in the Cork University Hospital, did you raise those issues?”

Barry: “Well, health wasn’t, to be fair, wasn’t my area of expertise but I mean, week upon week, we brought up cases of, when the negotiations for the, or the review of the discretionary medical cards. I mean there was, eventually it led to a point where I had to march up to the Taoiseach’s office and demand that a certain individual who was absolutely worthy of a medical card but to be given it because I wasn’t elected to see people like that without a medical card. It was absolutely ridiculous…”

Wilson: “And did you march up?”

Wilson: “And did you march in? Did you talk to the Taoiseach?”

Barry: “I did of course and I was absolutely at my wits end because, to be honest, that wasn’t good enough. I mean we had it for weeks upon weeks at the parliamentary party, bringing it up and this was done for a so-called saving of €28million but it’s you know, it’s very frustrating when you’re in a backbench position – you give your opinion, you expect it to be taken on board but it wasn’t. And, you know, that’s the reality of it.”

Wilson: “Do you feel let down by Enda Kenny?”

Barry: “Well look, I mean, I feel very disappointed that there wasn’t a more open government. I think they’ve in fairness, I think there was a lot of control exercised and I think they’re reaping the rewards of that control now. And to be fair, look, I’m not bitter, I mean I’m just saying it as it is. I’m obviously not part of this new government and I’ll move on with my life and, luckily enough, I can go back to my business but there are many others who can’t who were extremely good TDs…”

Wilson: “And what should Enda Kenny do now?”

Barry: “Well, he needs to take responsibility. We have seen our party go into a meltdown, we got more seats than we deserved because a lot of Labour TDs unfortunately were eliminated to elect Fine Gael and vice versa. That won’t happen again when those people are gone. Any person who’s in charge of an organisation where such a seismic collapse happens, you know, in my view, has to go..”

Barry: “I mean this isn’t personal, this is just being quite frank about it. It’s a situation that’s unacceptable. But I would say also there is no mandate for Fine Gael to go into Government. We’ll let Fianna Fáil, Sinn Féin, and all the other parties that are out there who have got votes based on criticism and so-called solutions to let those solutions come into play. I mean, ironically, a lot of them would get their money from increasing corporation tax. They’re anti-Europe and anti-Germany but they’re doing the very things that Europe wants us to do. And just watch the reaction of the many multinationals who give valuable employment here when we start becoming unpredictable…in our economics..”

Wilson: “So you, sorry Tom Barry, for interrupting you, so you think it’s time for Enda Kenny to go, to go now. Who would you like to see replacing him?”

Barry: “Well we’re very fortunate in the party to be fair. We still have extremely capable people such as Frances Fitzgerald, Leo Varadkar, Simon Coveney, there are many, many of them, they are very good people who I think can make a definite change and have the energy to do so but it’s not my call. I’m not a member of the parliamentary party, I’m simply like everybody else now at this stage, watching it but I do have a very informed position at this moment in time and that’s, it’s only my opinion. Certainly, look, I can’t affect change but this country is at a very pivotal point.”

Wilson: “And would you be saying any of this if you were still the Fine Gael TD for Cork East?”

Barry: “Absolutely, absolutely, I went to An Taoiseach’s office in Christmas 2014 to vocalise, there was a lot of problems going on at the time, to say, ‘look if it keeps going, something will have to change’ and I’ve made my feelings clear on this. Certainly, one of my first actions, if I was in the parliamentary party would have been to ask for the general secretary to consider his position.”

Barry: “Yes, that fiasco we had with, up in Sligo, where half a million was absolutely wasted…”

Barry: “Aw sure it was a ridiculous situation where the Taoiseach had said that he could run and apparently he didn’t say it and then, all of us sudden, we go to court and then we pull out, lose half a million which is ridiculous, and then, you know, we have situations where the general secretary is supposed to know what’s happening on the ground and has, in a lot of cases, you know, his interference has lost us seats – that’s the reality of it. The figures don’t lie.”

Wilson: “You blame, do you, the loss of your seat in Cork East on Taoiseach Enda Kenny and the general secretary of the party, Tom Curran?”

Barry: “Well mine and a lot of others but look…”

‘When You Reduce Taxes, You Take In More’