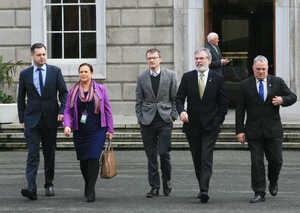 “As the party with the largest number of votes on the island, as the largest bloc within the Right2Change movement and as the third largest party in the Dáil and the main party of the working class in this State, it is incumbent on Sinn Féin to nominate a candidate for the position of Taoiseach when the Dáil resumes.

“Those who are homeless and those on hospital trolleys can’t wait for Fine Gael and Fianna Fáil – two parties with the same political philosophy and policies, with the numbers to do a deal – to try and figure out how they can control both sides of the Dáil. It is completely unacceptable.

“Sinn Féin will push for the Dáil to continue sitting, even if a Government is not formed on Thursday, to ensure ministers are held accountable for their decisions and to ensure accountability on the issues affecting citizens.”

Gerry Adams to be nominated for Taoiseach (breakingNews)

63 thoughts on “Coming Up On The Inside”