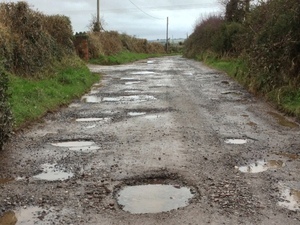 From top: Bumps in the road in North Kildare; Anne Marie McNally

We have a vestige of local government rather than a proper functioning arm of our democracy.

It’s rumoured to have been first uttered during Tip O’Neill’s 1935 Cambridge City Council campaign but if there’s any truth to that old (infuriating) adage that ‘all politics is local’ then it’s high time we turned it on its head and started acting like responsible citizens who respect the differentiation between a local councillor and a national legislator.

At a family gathering the other evening everybody, of course, wanted to talk politics with me. One woman from the Wicklow constituency, following a really good conversation about the Social Democrats and Social Democracy in general, told me that she hadn’t voted for Stephen Donnelly despite really admiring him and everything the party represents.

When I queried why she told me it was because he ‘is from East Wicklow and I live in West Wicklow and we needed somebody who will deal with our issues over here’.

When I asked what type of issues she was referring to she mentioned the local roads and ‘trying to get the dip in the road just before the bridge sorted’.

I asked who she voted for and nearly fell off my chair when she said [fomer Fine Gael TD now Renua deputy leader and pro-life activist] Billy Timmons. ‘But aren’t you in favour of repealing the 8th?’ I asked, having had previous conversations which had left me with the impression that she was fairly liberal and progressive.

She proceeded to tell me that yes she is indeed in favour of repealing the 8th and while she knows that Timmons is absolutely opposed to it that doesn’t really matter because ‘he always takes a call about local issues’ and he’s reliable on those things.

That led me down the rabbit-hole conversation about the purpose of local councillors. It didn’t matter it seemed because the local councillors ‘weren’t great’ while Billy would ‘always take a call.’

At the same time though you cannot blame people for electing those they feel will take their calls and resolve the issues affecting their day to day lives at a local level. S

Right now we have a system of local government that simply doesn’t work. Councils have very little power in relation to local policy formation and the elected Councillors have even less.

Check out the Facebook/Twitter posts of many local Councillors following Council meetings and you will routinely see posts regarding the unwillingness of the Council Executive body to provide information or pursue the requests of sitting Councillors. We have a vestige of local government rather than a proper functioning arm of our democracy.

You may argue that even if local Councillors were effective and in a position to deal with issues that citizens may still gravitate towards their elected TDs. In the short-term that may well be the case but if you institute proper reform with very clear structures and a mechanism that allows elected Councillors to perform effectively you will, with the correct political will, eventually change the popular culture.

With a culture shift that clearly delineates the local from the national, citizens will see that the most expeditious and efficient way of dealing with local issues is to approach their Councillors while the best way of ensuring good legislative oversight and passage is to elect parliamentarians who prioritise the national interest rather than the local pothole.

34 thoughts on “Who Should Fix The Road?”