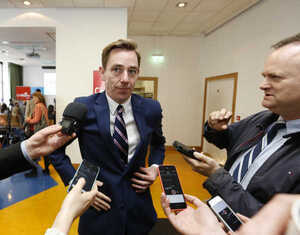 He’s had it up to ‘here’ with the World Wide Web.

September 2012,Tells listeners to his 2FM show that he had contacted Twitter US headquarters to get four parody accounts shut down.

’Somebody brought it to my attention that there was a number of them being me. It was only then when it started getting rude and kind of personal that somebody said to me, “You better get those taken down” and I did. I got four of them taken down. I sent off my driver’s licence details and got them taken down. I love humour and I love fun and I love boldness but I won’t tolerate nastiness. That’s where the line gets drawn.’

‘What’s happened more recently with social networking, and particularly Twitter, is that for a long time it was fun and it was like a really nice pleasant party and then the bad guys came along and wrecked it for everyone, hiding behind stupid names,’ he said. ‘There is a whiff of the bedsit off most trolls. It is disappointing. We can’t be beyond criticism but put your name to it. Don’t be a coward.’

”For a long time it was fun. It was like a pleasant party and then the bad guys came along and they wrecked it for everyone hiding behind stupid names” and that people could be “completely moronic” when it came to tweets.”

“There’s nowhere safe for children now….I worry about it – the whole anti-social network concerns me because there is no policing it. I support any initiative that is to do with trying to crush the virus of bullying. I would be very, very keen to try and highlight what’s happening on the internet. The internet is a lawless place – it’s a dangerous place – there’s no police. I think it’s the nearest thing to the Wild West that we can see in this day and age….”

“the party [Twitter) was over. I left Twitter because it was a time constraint and it was not a great place. It was fun but it was like – I had fun with it for a year and then decided ‘that’s grand’ – it’s a strange place.”

January 2015: On his RTÉ Radio One radio show discussing online trolls who abused the family of a toddler who died from a viral infection, He avers:

“[The words] “online” and “abuse” are starting to go hand-in-hand now and I don’t know what to say to that family. They’ve enough to be dealing with the loss of that little boy than having to go and worry about what’s online. I would urge nearly anyone who ends up in the public eye, for whatever reason, be it for good reasons but particularly for sad or bad reasons, or any reason, not to go online. Don’t read stuff. You don’t have to. It’s just heckling. That’s all it is. It’s heckling. And I wish that this family didn’t even find this stuff. You don’t have to go there if you don’t want to. You can just mourn in your own way without turning on a computer or finding stuff because people will always react and say something horrible. Always. Regardless of how happy or sad your story is.’ He added: ‘I hope that family have the time and the space to mourn the loss of that little boy without having to listen to the white noise of ignorance that can often show itself online.”

December 2015: Interviews the father of a six year old girl who had received criticism online following her appearance on the Late Late Toy show. He fumes:

“That is the way of online, I think … you know, there is this element that will almost be there and you know it . seems to be un-policeable… I’m an adult apparently and I don’t read online because it’s just, it’s too mean spirited and I don’t read it, even if it’s kind I don’t read it…I often say and sometimes it feels like a broken record sometimes it feels like the Wild West out there, there are no laws and there are no rules and there’s no sheriff….So you can have the good guys walking round, like you guys, you know talking about mental health but then you’ve got the he others who are, you know, psychologically challenged, I’d argue and writing this stuff down the bottom of a bottle of wine on a Friday night… I’ll tell you, I walked out of this building on Saturday with bunch of kids in here to sing for, I think it was, Sean O’Rourke, and they chased me down as far as my car singing word for word the My Little Pony song, it’s become a thing… The thing about being offline, you have the democratic choice to be offline and it’s very liberating, so I’d recommend it.”

March 13, 2016: The Sunday Independent records comments made in a recent interview with former RTÉ presenter Diana Bunici for her book, ‘The Pursuit of Awesomeness’, He rages:

“[t]hen online came along and honestly, if you want to depress yourself as a broadcaster, read online. If I could switch off the Internet sometimes I would. Especially for kids and bullying and all the things that are so easy to do for cowards…You used to go to school from 9am until 3pm and then you could switch it off. Now it follows you and the bullies can follow you now, wherever you are, if they want to.”

“I’d rather read a good book than what some guy in a bedsit watching Star Trek thinks about me. I made a decision to go offline a couple of years ago and it’s the best thing that’s ever happened to me.

To be continued (probably).

‘There No laws, No Rules And No Sheriff’

156 thoughts on “‘Some Guy In A Bedsit Watching Star Trek’”