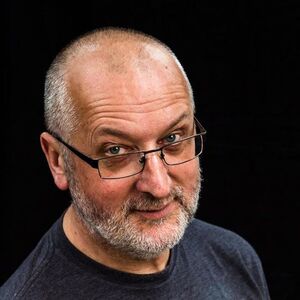 Anonymous insults in the days before social media. 1997 from the postcard stamps. Took a bit more effort – especially if you decide to add drawings – to put pen to paper back then but it sure ain’t new.

I wonder if the bashful author might now come forward 23 years later? If you want insight into the undertow of our poisoned culture then look no further than the comments section of Broadsheet.ie.

Soon as the site posted a short personal piece celebrating the courage of [Medicinal cannabis campaigners] Vera Twomey, and her husband Paul, this was the first comment:

Wow man i’m like so real, I get to use bad language in my screeds
I’m the street, man, I’m the life itself
You better recognise

This was followed by the usual litany of insults and sneers from a long line of nameless faceless keyboard warriors waiting in the wings.

I can take their malignancy but is it not disturbing that when these people read about a heroic mother and father protecting their beautiful daughter, their immediate and only response is to ignore that heroism and attack the hack who penned the piece?

Who are you? On the streets, or in bars, or restaurants, or playgrounds, or in any aspect of day to day life, I never seem to meet you. The vast majority of the folks I meet are good people. Fighting to stay afloat. Looking after each other. Being brave. Being kind.

Where are you emotional, psychological, political, intellectual parasites? Where do you go during the day? Or at night? Are the innumerable good people I meet not part of the real word? The real Ireland? Am I just naive?

Are they just a bubble of decent people surrounded by you bilious bastards?

Where does your scorn come from? Your cowardly rage. Your articulate rabies. What might happen if you redirected the cancer of your collective cowardice into positive and pragmatic action?

These are genuine questions. An attempt to understand you. To empathise with you. To rehumanise you.

Then again, you’ve probably been too busy composing your next contemptuous comment to have even gotten to the end of this piece.

Terry McMahon is a filmmaker. Twitter:@terrymcmahon69 You’ve shared my videos a few times, this is one about a poem (‘Numb’) you’ve previously published which was trolled quite horrifically. It’s called Unsolicited Advice from a Failed Male Poet. And there was an article put up on the Guardian about it for a bit of background.

READ ON: Irish Poet Who Wrote About Rape Ordeal Hits Back At Online Trolls (Guardian) He’s had it up to ‘here’ with the World Wide Web.

September 2012,Tells listeners to his 2FM show that he had contacted Twitter US headquarters to get four parody accounts shut down.

’Somebody brought it to my attention that there was a number of them being me. It was only then when it started getting rude and kind of personal that somebody said to me, “You better get those taken down” and I did. I got four of them taken down. I sent off my driver’s licence details and got them taken down. I love humour and I love fun and I love boldness but I won’t tolerate nastiness. That’s where the line gets drawn.’

‘What’s happened more recently with social networking, and particularly Twitter, is that for a long time it was fun and it was like a really nice pleasant party and then the bad guys came along and wrecked it for everyone, hiding behind stupid names,’ he said. ‘There is a whiff of the bedsit off most trolls. It is disappointing. We can’t be beyond criticism but put your name to it. Don’t be a coward.’

”For a long time it was fun. It was like a pleasant party and then the bad guys came along and they wrecked it for everyone hiding behind stupid names” and that people could be “completely moronic” when it came to tweets.”

“There’s nowhere safe for children now….I worry about it – the whole anti-social network concerns me because there is no policing it. I support any initiative that is to do with trying to crush the virus of bullying. I would be very, very keen to try and highlight what’s happening on the internet. The internet is a lawless place – it’s a dangerous place – there’s no police. I think it’s the nearest thing to the Wild West that we can see in this day and age….”

“the party [Twitter) was over. I left Twitter because it was a time constraint and it was not a great place. It was fun but it was like – I had fun with it for a year and then decided ‘that’s grand’ – it’s a strange place.”

January 2015: On his RTÉ Radio One radio show discussing online trolls who abused the family of a toddler who died from a viral infection, He avers:

“[The words] “online” and “abuse” are starting to go hand-in-hand now and I don’t know what to say to that family. They’ve enough to be dealing with the loss of that little boy than having to go and worry about what’s online. I would urge nearly anyone who ends up in the public eye, for whatever reason, be it for good reasons but particularly for sad or bad reasons, or any reason, not to go online. Don’t read stuff. You don’t have to. It’s just heckling. That’s all it is. It’s heckling. And I wish that this family didn’t even find this stuff. You don’t have to go there if you don’t want to. You can just mourn in your own way without turning on a computer or finding stuff because people will always react and say something horrible. Always. Regardless of how happy or sad your story is.’ He added: ‘I hope that family have the time and the space to mourn the loss of that little boy without having to listen to the white noise of ignorance that can often show itself online.”

December 2015: Interviews the father of a six year old girl who had received criticism online following her appearance on the Late Late Toy show. He fumes:

“That is the way of online, I think … you know, there is this element that will almost be there and you know it . seems to be un-policeable… I’m an adult apparently and I don’t read online because it’s just, it’s too mean spirited and I don’t read it, even if it’s kind I don’t read it…I often say and sometimes it feels like a broken record sometimes it feels like the Wild West out there, there are no laws and there are no rules and there’s no sheriff….So you can have the good guys walking round, like you guys, you know talking about mental health but then you’ve got the he others who are, you know, psychologically challenged, I’d argue and writing this stuff down the bottom of a bottle of wine on a Friday night… I’ll tell you, I walked out of this building on Saturday with bunch of kids in here to sing for, I think it was, Sean O’Rourke, and they chased me down as far as my car singing word for word the My Little Pony song, it’s become a thing… The thing about being offline, you have the democratic choice to be offline and it’s very liberating, so I’d recommend it.”

March 13, 2016: The Sunday Independent records comments made in a recent interview with former RTÉ presenter Diana Bunici for her book, ‘The Pursuit of Awesomeness’, He rages:

“[t]hen online came along and honestly, if you want to depress yourself as a broadcaster, read online. If I could switch off the Internet sometimes I would. Especially for kids and bullying and all the things that are so easy to do for cowards…You used to go to school from 9am until 3pm and then you could switch it off. Now it follows you and the bullies can follow you now, wherever you are, if they want to.”

“I’d rather read a good book than what some guy in a bedsit watching Star Trek thinks about me. I made a decision to go offline a couple of years ago and it’s the best thing that’s ever happened to me.

To be continued (probably). RIDICULE, ABUSE AND TROLLING – How to handle online harassment: This seminar for NUJ members includes a keynote by Dr Eoin O’Dell of TCD’s School of Law on the [Lorraine] Higgins and [Pat] Rabbite e-communication bills along with inputs from Sinead O’Carroll, news editor with TheJournal.ie, Karlin Lillington, Irish Times tech journalist, barrister Fergal Crehan along with plenty of time for questions and answers sessions. It takes place on Saturday, September 5, Connolly Room, Liberty Hall, Dublin 1, 12 noon till 4pm [link below for tickets].

How To Handle Online Harrassment (Eventbrite) On the bottom half of the ‘net.

“I am finding that an increasing number of journals are suspending or restricting online comment. Among the latest to do so was the National Catholic Register, whose editor, Dennis Coday, decided that the malicious, abusive and vile comments received – far from remarks on the substance of an article – were “pure vandalism”. Coday suggested it was everyone’s responsibility to make the internet a civil place by making contributors identifiable, just as they were in the days when editors (and lawyers) decided whose letters may or may not be published.
The Irish columnist Breda O’Brien wrote in February that, while she had to adhere to strict guidelines in her work as a print journalist, it was “bizarre” that “people can comment on my articles with impunity and say anything they like about me or about others.
…Perhaps my own fury and frustration with this state of affairs makes my response all the more direct. But the dirt, racism, foul abuse, the lies and innuendo and slanders and bullying on the web, in blogs and text messages and chat rooms, has become a sickness. “Trolls”, we call these psychologically disturbed people, and even that is indicative of our craven addiction to technology. So awed are we – so “taken over” by the new science of communication – that we have to liken these poison-pen writers and abusers to creatures of Scandinavian mythology rather than to the fantasists and racial bullies whom they really are…”

Our addiction to the internet is as harmful as any drug – and what passes for comment these days is often simply foul abuse (Robert Fisk, Independent.co.uk) Not so much a comment on the last week’s events, more a personal response to messages I’ve received. TrollSong: https://t.co/6tqyfYiktX

Contains language which some listeners may consider NSFW. “Speaking my mind.” What internet users seem to overlook is that the content of public discourse has not until now comprised the first-thought responses of contributors but (usually) something more considered, measured and refined.

…The general attitude – perhaps arising from a fear of seeming out of touch – seems to be that these new phenomena are unreservedly to be welcomed. Recently, there has been a soft initiative within this newspaper to persuade columnists to engage with posters who contribute to threads at the end of articles published on our web edition.

I am resisting, not because I am fearful of absorbing abuse but because I believe these platforms are about something quite different from our conventional understandings of public debate.

…Unfortunately, any attempt to enable society to focus on these questions is itself subject to the action of the problematic phenomenon, being instantly drowned in waves of abuse and derision.

And how’s that going down?

Pic via Communion and Liberation San Diego Comic Con has started and the pictures are already flowing from the convention floor. There’s an array of suits from Iron Man 3 (presumably the same ones that appeared in the first promo shots) as well as trolls from the upcoming Hobbit film.