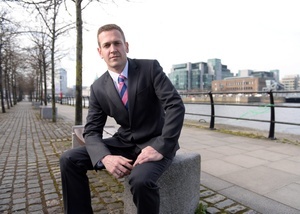 You may recall how, back in April 2012, Karl Deeter, of Irish Mortgage Brokers, claimed that 25 per cent of people who were in mortgage arrears were lying or ‘strategically defaulting’.

This morning Mr Deeter joined Ruth Coppinger, Socialist Party TD for Dublin West, on Today with Seán O’Rourke this morning on RTÉ Radio One, to talk about social housing.

Karl Deeter: “The idea of social housing I agree with, I agree with helping poor people. I think that when people are down on their luck they should receive assistance. What I’d be saying is that the underlying performance of it matters. So, in the same way that we say we should have hospitals, that the hospital performance matters, I’m saying we need to do the same on housing and not just see more of the same as being a solution. And really the point I would be making is that people who are not well-off are not a static group. You don’t necessarily become poor and then stay that way for life. But the tenancy right to a social house stays with you for life, once you get one. And effectively it becomes a brand of middle class welfare because in many instances you’ve got people who aren’t well off who can’t access social housing but you’ve got people who are moderately well-off who are earning above average wage, living in these social houses, receiving what is effectively a very subsidised rent.

Sean O’Rourke: “But is there not, for many years, a differential rent scheme whereby people pay according to their means?”

Deeter: “Of course it has and when you look at the figures though, let’s just examine them, look at the two-bed houses – average rent on those is €62 a week. The average rent overall is about €59 a week. The highest rent being charged in all of Dublin city and lmost likely for a five or six-bed house is €228 a week which is about €990 per month. Now what I would say then, is when you look at the five-bedroom houses and six-bedroom houses on average, it’s €80 a week or €117 a week. Which is a price so good that you simply, it can’t be matched anywhere.

If you were to charge these rents, and look at it from an investment perspective, in other words that we want to see people to be getting good value for money and be sustainable and build more, you’d have to build these houses for about €40,000 which is just not achievable.”

O’Rourke: “So is it your belief then that the rent charged to people who are there, who maybe moved in initially on the basis of need and inability to buy their own houses that, if they become well-off or if they become better off shall we say, that they should be charged the market rate?”

Deeter: “I don’t see an argument for middle class welfare and that is very distinctly the point I’m making. I don’t believe you should take people who can afford to pay more for something and give them subsidies. Now people say ‘oh but they are means tested and there’s differentiations, etc’ but that, to me, still doesn’t get to the root nub of the issue.”

Deeter: “There’s a lot of people who are well able to afford more than the rent because, let’s not forget, and this is where the proof of it all lies. Many people in social houses get mortgages and buy those homes, ok? And they end up paying more on that mortgage than they were paying on that rent. So a) I already know from having done hundreds of these types of loans, there’s a greater affordability there…”

O’Rourke: “Should there be a threshold in which people are told, either buy or vacate?”

Deeter: “I’m not saying there should be because this is really more of a thought experiment. I’m saying that if we’re going to have a serious conversation about social housing that we should be wondering why we are basically accruing benefits to some people while there’s other people who are locked out. In a way you’ve got some people who are doing quite well and they’re almost like bed blockers in housing.”

O’Rourke: “We’ll come to Ruth Coppinger in a moment but are you saying or suggesting Karl Deeter that this might be a way of securing extra money to invest in the development or in the building of new social housing?”

Deeter: “I absolutely am saying that like the money has to come from somewhere and I think there’s a wider social housing conversation that needs to be had about increasing things like local property tax to fund social housing, rather than Part V which, in the last four years, in its best year it only delivered 16 homes. As well as that you could reduce perhaps, by having a better-run section, the numbers of evictions. Because there’s another thing that people don’t talk about. They come on and say ‘oh look at the market, there’s loads of people being evicted.’ The actual eviction figures for Dublin City Council, ok, show that within Dublin City, the city council evict more people in the banks or building societies in 2011, in 2012, in 2013 and I’m talking two or three times more. Other than 2015, it was the first time the banks evicted more people than Dublin City Council so there’s a lot of things in it that we never discuss. I’m saying we need to have this conversation.”

Previously: Karl Deeter: Up To 25% Of Those In Mortgage Arrears Are Lying

Karl Deeter: Up To 25% Of Those In Mortgage Arrears Are Lying

“A Litany Of People In The Same Position’

123 thoughts on “I Have To Return Some Videotapes”