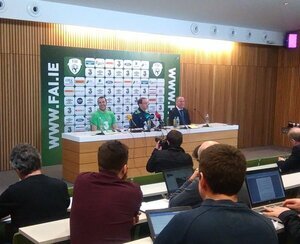 At the Aviva Stadium Dublin.

[Martin O’Neill] cracked his joke when asked about the policy of Wales boss Chris Coleman, who revealed earlier this week that his players’ wives and girlfriends would be banned from the squad’s base in France during the tournament as he attempts to remove all possible distractions.

And O’Neill batted the question away with a flippant comment, saying that only the “good-looking” wives and girlfriends would be allowed into the team hotel at the Euro 2016 finals.

…“Well, it depends on how good looking the girls are,” he said. “If they are really attractive, they’re very, very welcome. The uglier ones, I’m afraid not.”